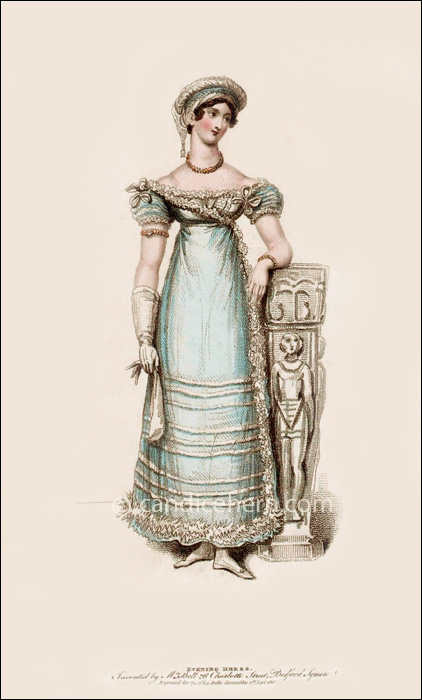 The first third or so of the description below extols the virtues of the new corset invented by Mrs. Bell, which is apparently worn under the dress shown in the print. As Mrs. Bell was what we might call the Fashion Editor of this magazine, her designs and inventions get full and often effusive attention. Here, the description is a glowing tribute to the exquisite taste of Mrs. Bell. I have no doubt that she wrote it herself!

“FULL DRESS. We have to notice an elegant corset recently introduced to the world of fashion by Mrs. Bell, and which is, we believe, an improvement upon her Circassian corset. This exquisitely formed corset is, without a doubt, highly deserving of praise for the easy graceful manner in which it displays the shape; it is in this respect highly superior to the French corset, which our fair fashionables have lately been so partial to, and it possesses also another great advantage in which the French corset is totally deficient, we mean the support it gives to the frame, while at the same time, it is totally free from superfluities of whalebone, steel, &c. The improvement which this corset makes in the figure is really wonderful, and can hardly be conceived by such of our fair readers as have not seen it on.  The gown worn with it is a round dress of blue crape over white satin, finished in a style equally novel, simple, and tasteful: it is very short in the waist and sleeves, cut very low all round the bosom, and fastened behind with a slight fullness in the back. The shape of the bosom is formed with exquisite taste by a half front of blue crape on the right side, which displays on the other an under one of fine lace. We have to observe that in introducing a mixture of lace and crape, Mrs. Bell has been guided by the wish of the lady for whom the original dress was made, and the effect is so strikingly beautiful that is justifies a departure from the usual mode. The lower part of the dress is ornamented with byas folds of white satin. For the sleeve, which is extremely tasteful and elegant, we refer our readers to the Print. The trimming, composed of crape to correspond with the dress, is the most exquisitely elegant and tasteful thing we have ever seen; it was invented, we understand, by Mrs. Bell on purpose for the dress; and certainly it does the highest credit to her taste, being not only strikingly pretty but perfectly original; it goes round the bottom, up one side of the dress which it forms into a drapery, and round the crape front to the shoulder, where it finishes with a crape bow; a narrower trimming to correspond edges the bosom. Head-dress of the Waterloo turban, it is both novel and unique. We refer our readers to the Print for the form of this elegant head-dress, for the effect, it can only be judged of by seeing it on; the taste of the inventress, Mrs. Bell, has never formed anything more novel, simple, and elegant, and for the becoming, that grand object with most fair ones, it carries away the palm from anything that has yet been introduced. Necklace a negligée of pearls, bracelets to correspond, and earring also of pearl of a simple but very pretty shape, they are small oval with a drop in the form of a heart, and the workmanship, which is French, is very curious.”