There is no title above the description of these dresses, but they are clearly evening dresses. During this period, very tall feathers were worn for most public occasions, even for walking dresses, but those worn for evening reached the greatest heights. I suspect one would have to bend one’s head while seated in a carriage or sedan chair, though the latter sometimes had a roof that could be opened. Evening feathers, as here, were often worn with turbans. 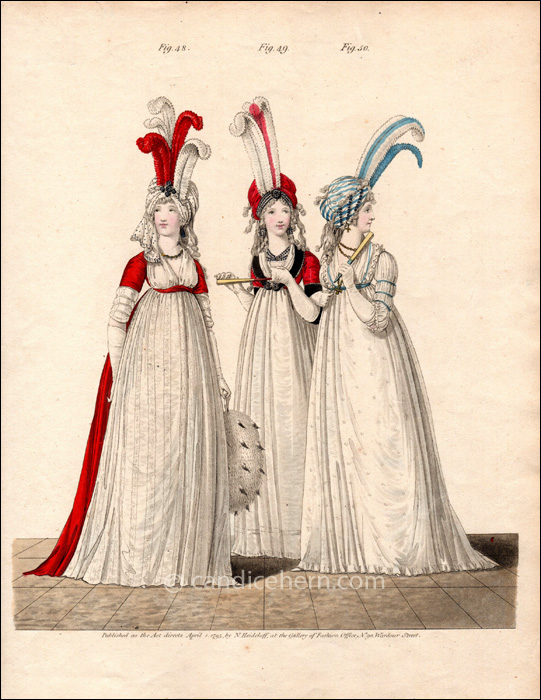 As with other prints of this year, the actual dresses (sometimes referred to as underdresses, petticoats, or chemises) are almost  universally white. Color is found in outer garments, as here in the red robes worn by the left and center figures.

All the jewelry is delicately painted in bright silver or gold metallic paint, difficult to see on-line but quite shiny in person.

“Fig XLVII. The hair dressed in ringlets. Chiffonet, arranged into the form of a turban, of white taffeta, spotted with silver; the end trimmed with a silver fringe, falling upon the shoulder. Three white and two scarlet-coloured ostrich feathers; and five diamond pins, forming a star, placed in the front. Petticoat of rich striped silk gauze. Polonoise of scarlet velvet with Circassian sleeves, and full sleeves of striped silk gauze. Small muslin handkerchief within the belt. Gold chain round the neck. Pearl ear-rings. Ermine muff. White shoes.

“Fig. XLIX. The hair in small ringlets. Turban of coquelicot-coloured crape. Bandeau set with four rows of perals, and a large pearl rosette in the middle. One white and one coquelicot and white striped ostrich feather in the front, inclining forwards. Chignon turned up under the turban, and the ends returned over it in three small curls of different lengths. Lawn petticoat, trimmed with a narrow fringe, headed at some distance by a plait. Robe of coquelicot-coloured Irish poplin, black velver cuffs, and capuchin cape, trimmed with a broad white silk chain. The robe fastened by a clasp, set with pearls. Small muslin handkerchief within the robe. Pearl necklace and ear-rings. White shoes.

“Fig L.  Hair dressed in ringlets.  Bandeau and  chiffonet of blue and white striped muslin. The bandeau crossed with pearls. One blue, and one blue and white striped ostrich feather on the left side. Chemise, of spotted muslin with a narrow flounce, and a plaiting round the neck, headed with a blue riband; the sleeves tied in three parts with the same riband. Handkerchief within the chemise. Blue sash. Gold cross, necklace, and ear-rings. White shoes.”