Fashions of London and Paris, March 1809. 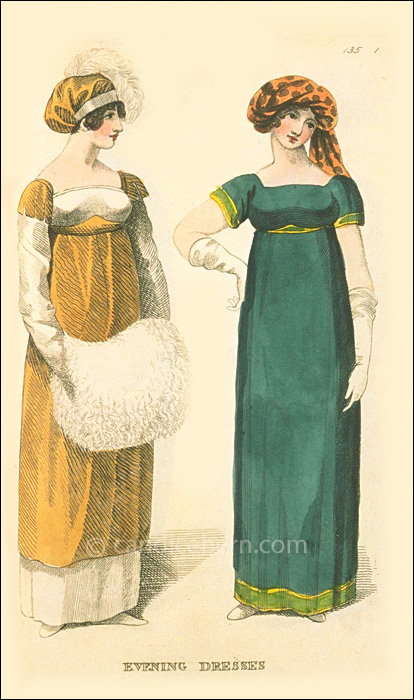 This little magazine was relatively inexpensive, and its prints typically show uncomplicated styles of dress. The structure and ornamentation shown was never as elaborate, or expensive-looking, as fashions shown in prints from the more upscale magazines. It would have been easy enough for a gentry or middle class woman to understand how to construct a dress similar to the ones shown here.

Though I’m not a fan of evening hats, I do sort of love turbans. Both of these are quite pretty. The one with the silver band is painted with silver metallic paint, which is impossible to see online, but in person is quite bright. The one on the right is called an “Indian shawl turban.” A true Kashmir shawl of the period was huge. It could wrap around the whole figure twice over. So perhaps this turban is made from a piece of a shawl, one that was perhaps worn or torn, and no longer wearable as a full shawl, but good enough to cut up and create interesting accessories. In any case, it makes a striking turban!

“Fig. 1.–A tunick or short robe of raised velvet, over an underdress of white satin. The satin dress formed close to the shape, the front of the velvet one forming a stomacher over it; long sleeves of white satin, made very large, with slashed epaulettes of velvet. A turban of velvet the same as the dress, with a band of silver round the front and two ostrich feathers. Swansdown muff.