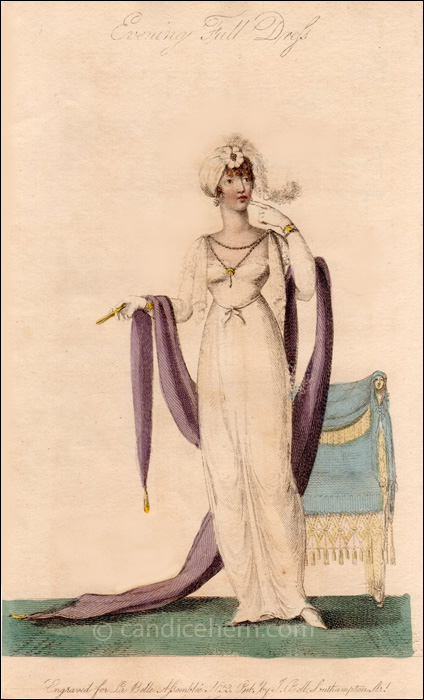 In 1809 and 1810, one occasionally sees a waistline lower than other dresses of that time, and usually in evening dress. I suspect the designers were experimenting. By 1811, though, they must have decided no one liked the low waists, or perhaps realized that the French designers kept the waists quite high, and you don’t see them drop again until they start to fall toward the natural waist in the 1820s.

The descriptions says the jewelry is pearl, though it is painted here as gold. It also mentions a cross, but the pendant shown is not a cross but a crescent from which a deep teardrop is suspended.

“A FINE INDIA MUSLIN TRAIN DRESS, fitted close to the shape, edged over the bosom with scollop lace; a rich lace drapery suspended from the shoulders; lone lace sleeves, the cuffs ornamented with bugles. A purple French scarf, finished with gold tassels, thrown gracefully over the shoulders; a white satin cap with a lace rosette, a pearl aigrette placed in the center, and ornamented with a long white ostrich plume. Pearl necklace, cosss, and earrings. Shoes and gloves of pale-lemon coloured kid. Hair in full tufted curls.”