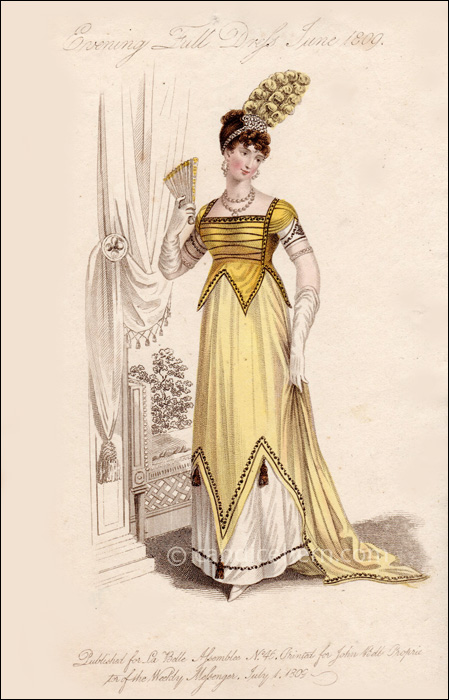 The description calls this “The Elvira Dress.”  I have no idea who the Elvira was who inspired it. If anyone has a guess, let me know.

Though this is a very elegant dress, it appears somewhat matronly, perhaps  due to the low waist of the short jacket. It would be interesting to see what the dress looked like without the jacket, though the jacket seems to be an integral part of the ensemble.

The description does not mention the headdress, which appears to be a diamond bandeau with a large yellow plume. Pretty spectacular!

“THE ELVIRA DRESS. This dress is composed of yellow crape, with a train about half a yard in length; the front of the skirt forming a deep vandyke (to the point of which is suspended a tassel), and is embroidered round the edge in two shades of brown chenille; the sleeves are formed of several rows of plaits crossed on the arm. To complete the whole of this elegant dress, there is worn with it a jacket of yellow satin, which s formed with three deep vandykes behind and two in front; the bosom square, with three straps across the center, which are fastened with diamond brooches; the points of this jacket, front, back, and shoulder straps, are embroidered at the edges the same as the dress, which is worn over a slip of shite satin, likewise embroidered round the bottom, and the sleeves of which appear below the crape over it, and are finished at the bottom with chenille embroidered in form of a vandyke, with the point turned upwards, the center filled up with a sprig.”