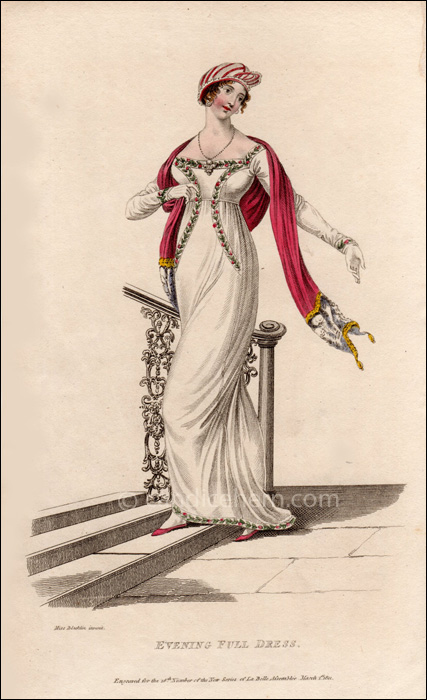 Britain had been in mourning for the death of Princess Amelia, favorite daughter of George III, since November. The official mourning period had expired on January 11. The editors of this magazine had discreetly complained in the January issue that mourning had been extended for the death of the Queen of France. Though dated March 1811, this print was published in the February issue. (La Belle Assemblée always dated its fashion prints and fashion commentary for the upcoming month.) In this issue, the editors are pleased to note that blacks have been “laid aside,” and that “gloom seems to have subsided, and gaiety and fashion are fast entering on spring.” They present this Evening Full Dress as an example.

“A gown of plain white India muslin, made loose in the neck, with long sleeves, and short train trimmed with a fancy border of stamped leaves in satin. A white satin cap, ornamented with crimson or morone coloured flossed silk trimming, A short Persian scarf of morone coloured silk, with rich border and tassels, is fancifully worn over the shoulders. Amber necklace and earrings. Hair in full curls, divided rather toward the left side. Gloves and shoes of white or morone kid.”

The designer of the dresses shown in fashion prints is often mentioned in the text, but this is one of the only prints I’ve seen where the name is engraved below the image: “Miss Blackman invenit.” That is a Latin term for “designed it” or “devised it.”