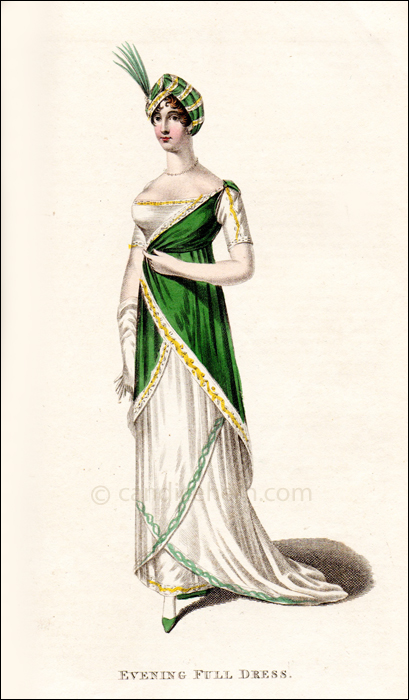 I love this very elegant dress, especially the green tunic. The turban gives the model a somewhat more mature look, but it still appears very stylish.

“A robe and petticoat of white satin, with short sleeves, trimmed with green or yellow chenille; over which is worn a light green drapery of crape, fastened on the left shoulder with an amber or cornelian brooch; folded over the left side of the figure, nearly concealing the waist on that side; the hind part of the drapery is simply bond in at the bottom of the waist, and confined underneath the drapery in front, enitely ornamented round with yellow chenille. With this dress is worn a Turkish turban of green crape, with trimming to correspond, with plume on the right side. The hair in small round curls, divided on the right side. Amber or cornelian necklace. Gloves of white kid. Shoes of green kid, or silk.”

The simple necklace and small hoop earrings, much less opulent than is usual for full dress, may be a nod to the trend of simplicity seen among younger ladies, as stated in the General Observations on Fashion and Dress in this issue of the magazine: 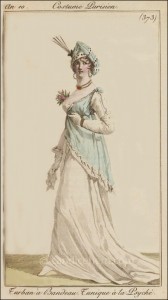 “It is a singularity, worthy of remark, that for this last fortnight our younger belles have declined the aid of any ornament whatever, neither necklace, earrings, brooches, bracelets, or even combs have appeared upon them.”

This elegant dress exhibits the continued influence of classical Greece, which was so prevalent in the prior decade, especially in the draping. In fact, the dress appears to have been copied from, or at least inspired by,  a French print from 1802, seen at right. It is from the Parisian magazine Journal des Dames et des Modes, March 26, 1802. It is not unusual to see an earlier French print modified a bit for a later British magazine. It seems French fashion continued to inspire, no matter how old the original design. Click on the print to see a larger version.