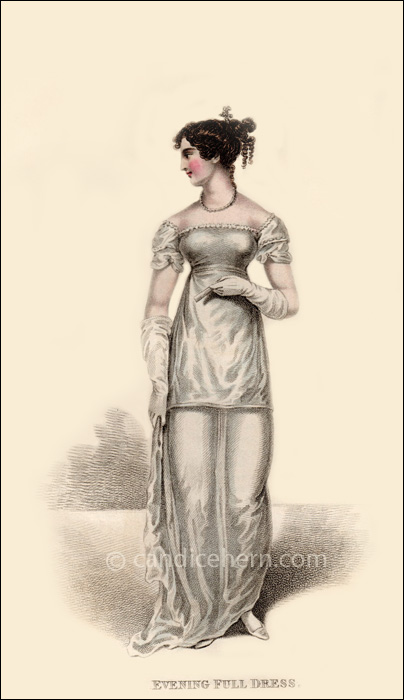 This dress is somewhat unusual as the over-dress is quite short. The description says it comes almost to the knees, but it is much shorter in the print. The under-dress, of satin, is rather clingy, leaving little to the imagination. I think I would prefer the over-dress to actually come closer to the knees, as it looks too short to me, a bit out of balance, and revealing too much leg.

“EVENING COSTUME.  White figured satin demi-train, richly trimmed round the bottom with crape intermixed with chenille; over this a short dress of white crape, made nearly top the knee in front, but considerably longer behind, and trimmed with a rich embroidery of chenille: this dress is cur down round the neck so as to display it very much, a short crape sleeve falls over the satin one, and is trimmed, as is also the bosom of the dress, with chenille; the undersleeve is made very full, and looped up in front of the arm with a pearl ornament. The hair dressed very full on the forehead, and low at the sides; strained back from the front in the Grecian style, and fastened up in a knot at the back of the head, from whence two ringlets fall almost to the neck. White pearl sprig, placed very far back in the hair. Necklace and bracelets of the same. Spangled fan, and white kid gloves.”