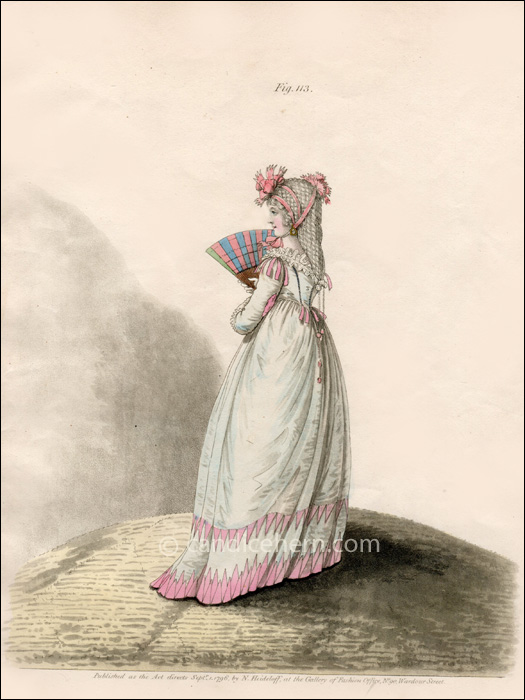 The Gallery of Fashion was a very expensive, very exclusive magazine published in London by Niklaus von Heideloff from 1794-1803. It was available only by subscription, and  subscribers included the Queen and several of the royal princesses. The prints are large, almost twice the size of the prints from Ackermann’s Repository of Arts or La Belle Assemblée at 12″ x 9 ½” (quarto size). This was the first publication to use silver and gold metallic paints, as here, in the gold hoop earrings (difficult to see online, but in person the gold is quite shiny and bright).

The title of the print, in the text, is simply: RANELAGH. One can assume that this dress, clearly an evening dress, would have been worn for an evening at the Ranelagh Gardens. The famous pleasure gardens, located in Chelsea, were opened in 1741, and in the 18th century were considered, by some, to be more fashionable than the rival Vauxhall Gardens. But Vauxhall ultimately won the popularity contest, and Ranelagh closed in 1803.

It is difficult to be entirely certain whether this dress would have been classified as Full Dress or Half Dress. But because it was apparently meant to be worn at a pleasure garden, which is not necessarily a formal affair, I am making the assumption that this classifies as Half Dress.

“RANELAGH. Italian Dress. The hair round the face in easy curls, white silk net adorned with tassels, trimmed and tied under the chin with white satin ribband; chignon within the net. Corset and petticoat of white taffeta, trimmed with silver cords, and at the bottom with deep Vandyke scollops of rose-coloured satin; short sleeves trimmed with lace; puffs and epaulettes of rose-coloured satin. Double plaiting of broad lace round the neck, Large gold hoop ear-rings and chain. White gloves and shoes, embroidered with silver.”