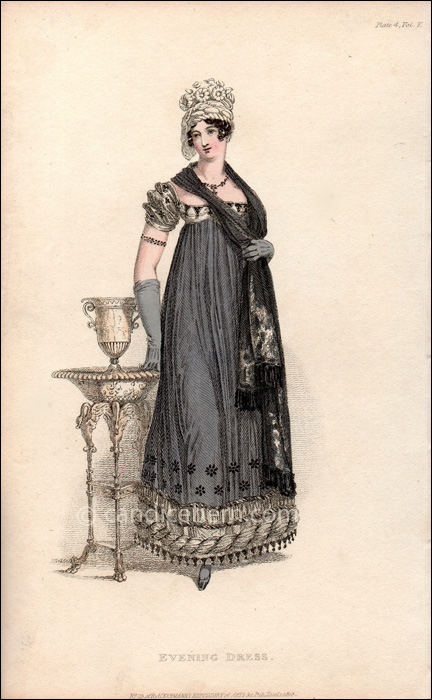 This mourning dress is in honor of the death of Princess Charlotte on November 6, 1817. It actually represents half-mourning as it incorporates white (full mourning would be stark black), and as it was 2 months since the popular princess’s death, half-mourning would have been appropriate.

Mourning, at least for a public figure and not for a close relation, clearly allowed for evening entertainments, based on the number of evening mourning dresses shown in the fashion prints.

“A black crape frock over a black sarsnet slip: the body is composed of white crape tastefully ornamented with deep vandykes of black velvet, each vandyke finished at the point by a little light ornament of black chenille. Short full sleeve of intermixed black and white crape; the fullness drawn to the middle of the arm, and confined in three separate folds by vandykes of black velvet. The bottom of the skirt is finished by a row of black velvet vandykes, surmounted by a large rouleau of white crape, entwined with black chenille. Above this is a piece of white crape, tucked byas, and finished at the edges by rows of black crape leaves; two rows of roses, set on at small distances, and without leaves, which are composed of black crape mixed with chenille complete this elegant and novel trimming. Headdress, a white crape toque, for the form of which we refer to our print: it is elegantly ornamented round the front with chenille, and finished by a diadem of white crape roses. The hair is dressed full on the temples, and much parted in front. Ear-rings, armelts, necklace, and cross composed of jet. Black shamoy leather gloves and slippers, the latter ornamented with rosettes of white chenille. A black China crape scarf, richly worked at the ends in an embroidery of white flowers, and finished by a rich black silk fringe, is thrown carelessly over the shoulders. …

“We are indebted to the taste and invention of Miss McDonald of No. 84, Wells-street, for both our dresses this month.”

The section entitled General Observations on Fashion and Dress describes dresses of all sort primarily in terms of black and white, appropriate for half-mourning.