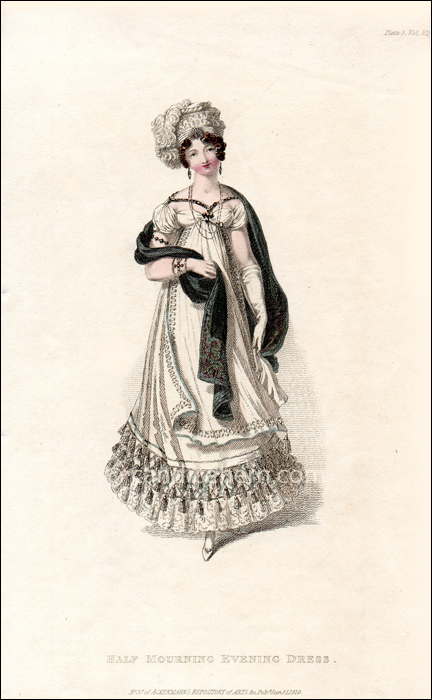 Queen Charlotte had died on November 17, 1818. After 6 weeks of full morning, as prescribed by the Lord Chamberlain, half morning was now allowed.  A variety of half mourning styles were shown in ladies’ magazines, as shown in this walking dress from the same issue of this magazine. Half mourning allowed whites, greys, and lavenders, along with black. Here, a white dress is trimmed with black embroidery and jet beading, and all jewelry is made of black jet. A black shawl, not mentioned in the description below, adds an additional note of mourning,

As evening dresses are seen in the magazines for both full and half mourning, clearly one was allowed to attend social functions while in mourning for a member of the royal court, as long as one showed respect in one’s dress. Such would not be the case if mourning a member of one’s own family. A widow, for example, would not attend evening social functions for at least a year after her husband’s death.

“EVENING DRESS. A white crape round dress over a white sarsnet slip; it is cut very low all round the bust, and the waist is as short as possible: a full sleeve, which is likewise very short. The bottom of the skirt is ornamented with a full rouleau of white crape, which stands out, and is surmounted by a broad and rich trimming composed of jet beads. A white crape apron is worn with this dress; it is a three-quarter length, narrow at the top, and broad toward the bottom; it is finished with rich tassels at each end, and has a slight embroidery in black silk all round. A necklace and broach of jet, put on in the Grecian style, partly shade the bust. Ear-rings, armlets, and bracelets of jet to correspond. Head-dress, la toque de Ninon; it is of a moderate height, and of an elegantly simple form: it is ornamented with a long plume of ostrich feathers, which fall over the left side, and a butterfly composed of jet, which is placed in the center of the forehead. White leather shoes, with jet clasps. White kid gloves.

“We are indebted to Mrs. Smith of 15, Old Burlington-street, for both our dresses this month.”