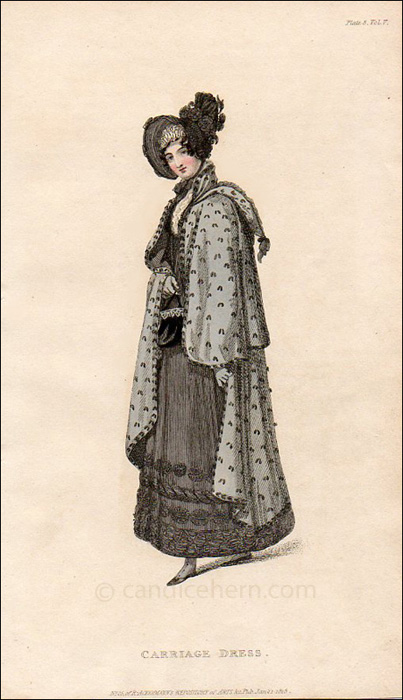 This half-mourning ensemble is in honor of the death of Princess Charlotte on November 6, 1817.  At the time this magazine was published, probably late December, full court mourning was still observed in the upper levels of society. However, the “General Observations on Fashion and Dress” in this issue of the magazine states: “In the carriage costume there seems to be in some measure a departure from the strict etiquette of court mourning.” That explains the gray cloak and touches of white, which mark this ensemble as half-mourning. Without the cloak, the dress underneath would certainly have been appropriate for full mourning, especially in the fabrics used (full mourning required fabrics with a dull finish, eg bombazine and crepe).

“Bombazeen high dress: the body, which is quite plain, fastens behind. There is no collar, but it is trimmed full round the throat with black crape. Plain long sleeve, finished at the wrist by a puckering of crape, intermixed with rich black silk trimming. The skirt, which is of a moderate width, is trimmed round the bottom with a double row of black crape, disposed in a light and novel manner. This is surmounted by a row of Spanish puffs, which are let in very full; they are of a round shape, and the middle of each is formed of a piece of black satin disposed in full plaits. Over this is a rouleau of intermingled black crape and rich black silk trimming, and above the whole is placed a row of Spanish puffs, composed wholly of black crape, and something smaller than those beneath.

“With this dress is worn the Russian wrapping-cloak, composed of tufted mole-skin cloth, and lined with black sarsnet. The form of this cloak, as our readers will perceive by our print, is novel and striking. A pelerine of enormous size, and a large full hood, render this one of the most comfortable envelopes we have seen for a considerable time.

“Parisian bonnet, composed of a new material; the crown is of a moderate height, the brim is large, and the edge finished by a full band of crape, and crape roses set on at small distances; it is ornamented with a wreath of black flowers.

“Morning cornette composed of thin lawn, the borders edged with black. Black shamoy leather sandals and gloves. Ridicule, composed of black velvet, ornamented at the corners with white tassels, and a rich white silk trimming round the top.

“We are indebted to the taste and invention of Miss McDonald of No. 84, Wells-street, for both our dresses this month.”