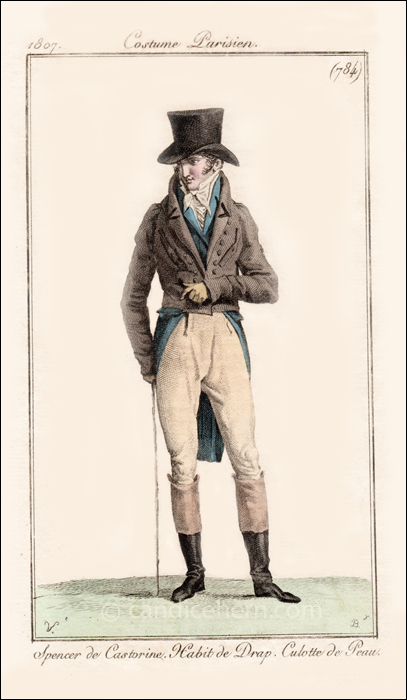 This gentleman’s ensemble is quite interesting in that it shows a short spencer jacket over a more traditional tail coat. The spencer has no tails. (The spencer jacket is said to have made its first appearance on the fashion stage in the 1790s when the 2nd Earl Spencer accidentally burnt his coattails by standing too close to a fire, and had his tailor adapt the charred coat into a short jacket.)

The beaver skin spencer is double-breasted, showing the style often seen prints from the first decade of the century, where the standard buttons continue in a row up almost to the shoulder, as seen here and here. The blue wool tailcoat underneath almost acts as a waistcoat. There appears to be a white waistcoat underneath. At this time, it was popular to layer waistcoats.

The breeches are of some kind of leather, probably doe skin, which was one of the most common textiles used for breeches. The top boots show, in typical French style, an exaggerated turn-down. The absence of spurs, along with the walking stick, make this a walking or promenade ensemble, and not a riding costume.