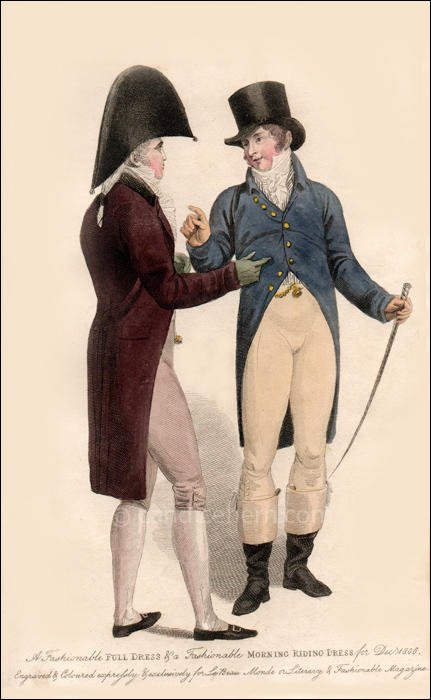 Le Beau Monde or Literary & Fashionable Magazine was published only from 1806 to 1810, so the prints are much more hard to find than those from Ackermann’s Repository of Arts or La Belle Assemblée. The magazine was published by John Browne Bell, son of John Bell, publisher of La Belle Assemblée and other popular magazines and newspapers. Father and son were apparently estranged, and Le Beau Monde is generally considered the son’s deliberate rival of his father’s popular publication. The son’s venture, however, was not successful, and folded after less than 4 years.

Le Beau Monde was not as specifically targeted to a female audience as was La Belle Assemblée. It attempted to appeal to the fashionable gentleman as well as the ladies, with such features as reports of new sporting attire for gentlemen, new coach designs, accounts of horse races, etc. The fashion prints always depicted more than one figure, and often included a male figure. This print is somewhat rare in that it depicts two male figures.

“Fig. No. 1–Evening Dress.–For this dress are used various shades of dark chocolate, brown, and olive coats, which are made in much the same manner as they were last month, both in regard to the collar and lapelle: but the waist is somewhat lengthened, and the hip buttons are rather farther than they were at that time. The length of the coat remains the same, and the buttons are either covered with the same cloth as the coat, or are formed of basket-worked twist to match. Velvet collars are still worn. White marseilles, quilting, waistcoats, continue to be the only fashionable wear with coloured clothes. The breeches are much as before. They are made of the various shades of light drab colours: they descend comfortably below the knee, and are there tied with a silk string. Silk stockings of the natural colour are more prevalent than those of pink.

“Fig. No. 2–Morning Dress–The morning coats are generally worn of the same colours and make as those of the evening, and are distinguished from them only by having a plated button, which is now worn much larger than it was formerly.–But the most gentlemanly dress is a single-breasted coat (according to the engraving) buttoning comfortably over the body, and cut away to shew the breeches. The most genteel colours are darkish green mixtures, or nut-coloured mixtures, coats of which are equally fashionable with or without a black velvet collar. Plain plated buttons are worn exclusively on these coats.–The coat itself is about two inches shorter than the evening coat, and has no pocket flaps at the sides. The waistcoats for this dress are almost exclusively of striped toilinets, which are worn in rather broader stripes than was formerly in fashion; and the stripe is not beginning to be perpendicular with the body instead of horizontal. The breeches are made of drab-coloured milled kerseymeres, with gilt buttons at the knees, and made sufficiently long to come into the whole boot; but the most general dress are pantaloons of much the same colours as the breeches. These are frequently made of ribbed kerseymeres, and are worn with Hessian boots.”

It is interesting to note that neither of the hats is mentioned. When describing female fashion, hats often get as much description as the dress! The bicorn hat on the fellow in evening dress would have been carried under his arm when he arrived at his ball or party. Note the this same fellow wears his hair in a queue, and it is powdered. The General Observations following the print description mentions that hair is still powdered for evening, which, I confess, surprises me, as 1806 seems a bit late for powder and long queues, at least among the young, fashionable set. Perhaps this was the tail end of that trend. The article goes on to say that “hair continues to be dressed à la Titus in the morning.”