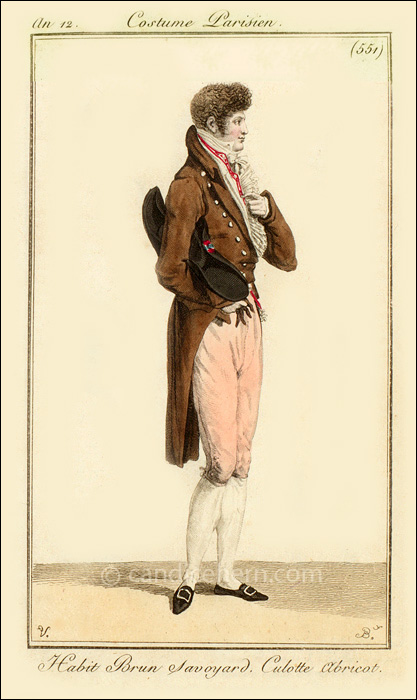 This is clearly an evening costume, as the gentleman is wearing buckled evening pumps and is carrying a chapeau bras, a collapsible tricorn hat that was carried under the arm with evening wear. The hat is adorned with a tri-color French cockade.

The ruffled shirt front is also rather formal. Note the high collar points. He appears to be wearing two waistcoats: a white one over a red and white one. The coat buttons running from waist to shoulder is typical of this period, seen frequently in both French and English prints.

The apricot-colored breeches include three knee buttons and a tie, but no buckles. The breeches are typically loose-fitting. (Pantaloons were the really tight-fitting pants, so tight there were often called inexpressibles.) The breeches are high-waisted, which is also typical of the early years of the new century.

At this time, buckles were worn on men’s shoes only for very formal occasions. These appear to be silver, but might also be paste. Buckles in general had gone out of fashion during the Revolution, but continued to be worn for formal occasions throughout the 19th century in both England and Europe.

This print was designed by Carle Vernet and engraved by Pierre Baquoy, both very popular Parisian artists.