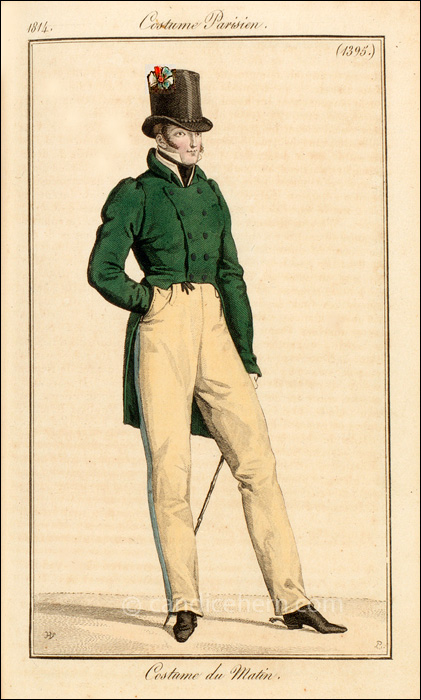 Trousers had become fashionable for day wear as early as 1807, and though breeches and pantaloons were still the preferred garments, by 1814 trousers began to gain more widespread popularity. In England, Beau Brummell is often credited with encouraging the popularity of trousers, conceiving the idea of adding stirrup straps under the foot to maintain a clean, tight line. In this French print, it appears there might be black stirrups attached to the trousers, especially considering the perfect unwrinkled line, but that is only an assumption. The colored stripe down the trouser leg is seen in many French prints, generally in red or blue.

The double-breasted jacket is buttoned almost to the neck, with the hint of a white waistcoat beneath, and a black neckcloth. The shoulders in the jacket are showing a new fullness which will become more pronounced in another ten years or so,

The top hat is adorned with a tri-color French cockade.

Note that the gentleman is wearing spurs. As trousers would not typically be worn for riding at this time, the spurs are no doubt a fashion affectation, marking the gentleman as a sportsman. He also carries what looks to be a rustic walking stick.

I am unable to provide descriptive texts about the prints from this magazine because there weren’t any. In all the issues I have perused, the only description of a print is what is shown at the bottom of the print. There is an accompanying article on the latest fashion news in each issue, but for some reason, the fashions shown in the prints are not described at all.