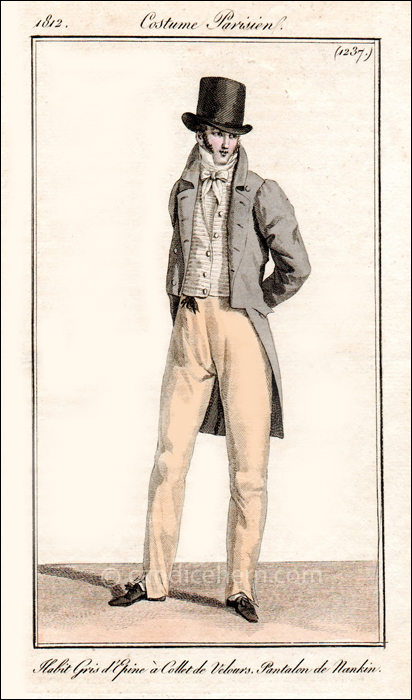 Trousers were becoming more fashionable at this time. Not as tight-fitting as a true pantaloon, they nevertheless held a close fit through a narrow ankle, most often held down by an elastic strap or stirrup under the instep (said to have been invented by Beau Brummell). It is difficult to tell if these trousers have stirrups, but the fit suggests they do,  They are cut long with a slit over the shoe.

Coats had tightly set sleeves throughout the Regency period, but by 1812 the top of the sleeve was gathered with more fullness. That fullness would continue to increase through the 1820s. The button holes running up both lapels on this coat appear to be decorative rather than functional: a French affectation.

The striped waistcoat is single-breasted with a standing collar. Though it was popular to wear multiple waistcoats, this appears to be a single garment. But it was summer, so layering of waistcoats would have been uncomfortably warm. Below the waistcoat can be seen a group of fobs. The shoes have bows instead of buckles. The top hat was de rigeur for the fashionable gentleman.

At this time, formal evening wear would still have consisted of breeches and stockings, so this ensemble would have been worn during the day.