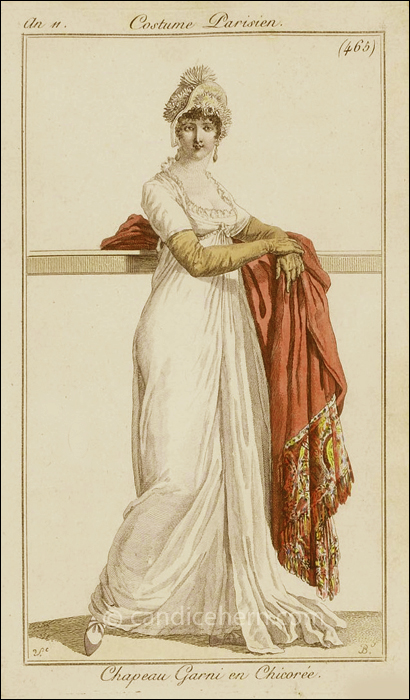 We can tell this print shows us daywear for outdoors because of the bonnet, which is an outdoor straw bonnet, not one that would have been worn with evening wear (which are most often capotes or turbans made of fabric without any stiffening, like straw), and by the gloves, which appear to be kid leather in what the British would call York tan.  Most evening wear is shown with white gloves. The caption says that the bonnet is ornamented with chicory. As I mentioned in other articles, the French dressed much more provocatively during the day than the British, at least judging from the fashion prints. More décolletage is shown here than would have been seen in British day wear. No bulky fichus or modest chemisettes for the fashionable French lady!

I am especially fond of the full skirts of this period, all very long and often, as here, with demi-trains. French prints are also wonderful in the way they display shawls. Never a random accessory, shawls are generally given visual prominence, certainly in regard to color, and their patterns are beautifully hand-painted.