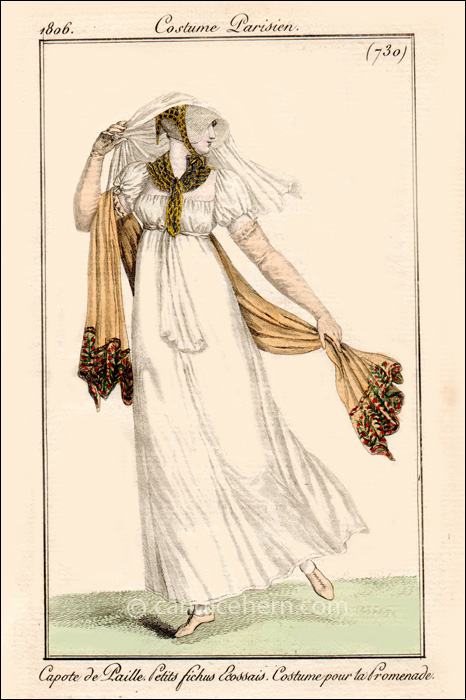 I am especially fond of this French print because of the sense of movement, the way the shawl, scarf, and skirt all seem to be moving in the breeze. This type of figure in motion is more often seen in French prints than in British prints, with the exception of a few British prints of ball dresses where the figure is dancing. French prints often show all sorts of action, which I think helps to display how a fashionable ensemble would actually look in the real world.

The dress shown here is very simple — white, probably muslin, gathered at the neckline and sleeves, and tied at the high waist with a white sash. The shawl (which looks dark yellow in some versions of this print and taupe in others) is either embroidered on the edges, or woven in a floral pattern at the ends. Small Scottish plaid handkerchiefs (“petits fichus Ecossais”) are tied around the neck and around the straw bonnet. A white scarf is draped atop the bonnet.

Note the long gloves, which is typically French for day wear, and much less often seen in British prints of day wear. The color looks to be what the British would call York tan, and they are mostly likely kid leather. They fit much tighter than long gloves shown in British prints. The tops of the gloves have ties to hold them up, a small detail that always intrigues me and seems very rational.

Also note the shoes, which are a bit unusual. They appear to be laced shoes, more like a brogue than a half-boot, which would rise higher on the ankle. Perhaps they are Scottish brogues to go with the plaid kerchiefs!