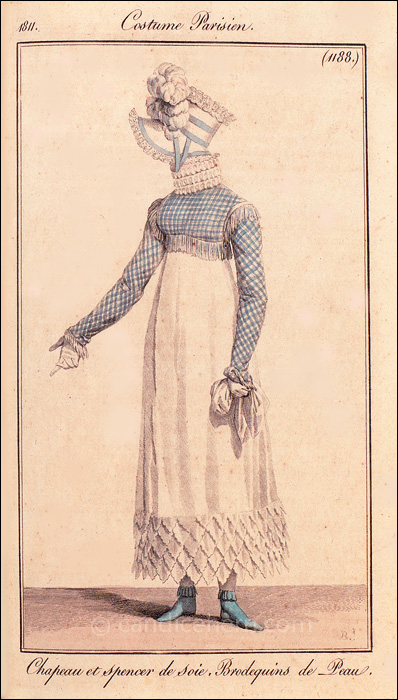 There is so much to love about this print. Let’s start at the top.

At the beginning of 1811, the French prints show bonnets of moderate size, with the brims starting to grow broader, but the crowns remaining somewhat close to the head. By the end of the year, as in this late November print, the crowns have risen to new heights, and are more often straight-sided rather than rounded. So, now both brim and crown are exaggerated. British hats will be slightly behind in this trend, with higher crowns not appearing for another 6 months or so.

The spencer is especially charming in blue and white plaid, with fringe at the shoulders, wrists, and under the bosom. (One has to admire the skill of the colorists in painting the plaid to follow the shape of the bosom and arms.) The high ruff collar could belong to the dress beneath, but might also be a part of the spencer. It is difficult to be sure.

The bottom of the white dress is trimmed with multiple rows of vandyking, creating a deeper flounce than is typical at this time. The short hem length is intriguing. This is a French dress, so it might indeed be scandalously short, or it might have been shown in a short length simply to reveal the adorable blue half-boots. No British prints of this year show skirts this short. I am thankful this French artist allowed us to see these wonderful half-boots.