Fashions of London and Paris, March 1798. 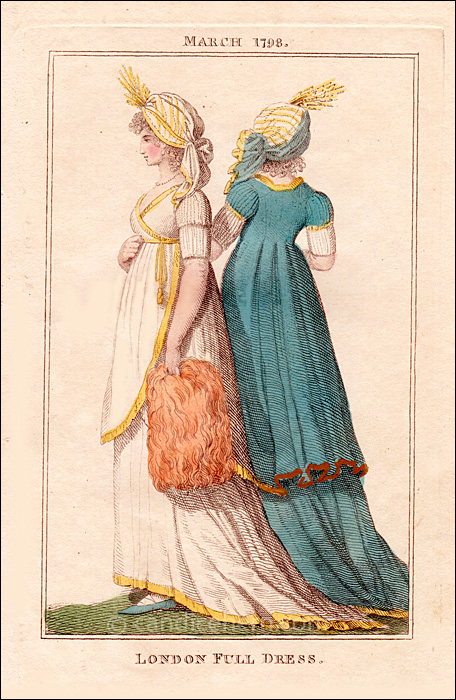 This print is from the very first issue of this small, inexpensive magazine, the first and only magazine at this time devoted entirely to fashion. There were only three other ladies’ magazines in 1798 that included fashion prints: The very upscale and expensive Gallery of Fashion; The Lady’s Magazine, which started out in 1770 with black and white fashion prints in a few issues but then stopped including them again until around 1800; and the brand new The Lady’s Monthly Museum, another small inexpensive publication that appeared to include fashion prints begrudgingly to appease their female readership. While the other magazines included one or two prints per issue, Fashions of London and Paris often included as many as 5 prints, the number varying with each issue. The quality of the prints was not high, but they do have a certain charm.

This print appears to show the same dress and headdress in different colors.

“Figure 1. HAIR.–Short, in Curls behind; frizzed high in Front; short and combed straight at the Sides.
“HEAD-DRESS.–White Satin Turban; round the Front a Twist of gold Gauze, which is fastened at the left Side with a long End, trimmed with gold Fringe; a gold bead Sprig in Front.
“ROBE, &c.–A short Robe of plain white or gold spotted Muslin, with train Petticoat: the Whole trimmed with flat gold Trimming, and fastened on the left Side with a gold Cord and Tassel. Gold Muslin or Gauze Epaulets; white Satin short Sleeves, plaited. Salmon-coloured silk Gloves, meeting the Sleeves. Shoes blue or white, with lacing. Small gold Ear-rings, with gold Necklace. Goats’-beard Muff.