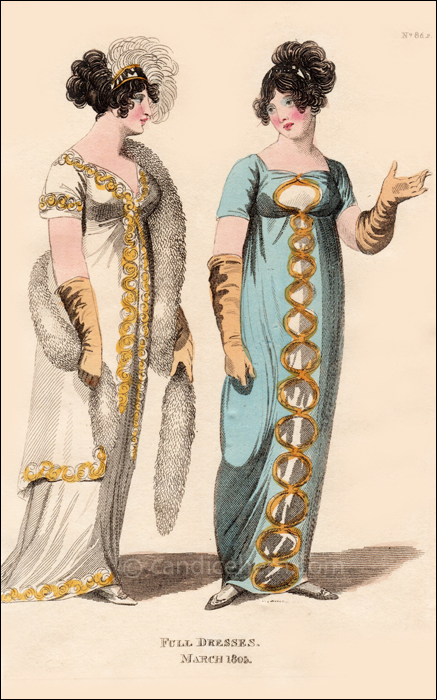 Fashions of London and Paris, March 1805.

The dresses shown here were worn at a concert, ball, and supper given at Windsor Castle on February 25, 1805. The event was over a year in the planning. The Gentleman’s Magazine reported that the entire evening cost over £50,000. The king even commissioned a new service of sterling plate, “the most magnificent in Europe.” The invitation list included 390 “persons of distinction,” along with the Royal Family and officers of state. The concert began at 8:00pm, and featured the Oratoria of Esther. The ball commenced at 10:00pm, with the first  dance lead by the Duke of Cambridge and Princess Augusta, and ended at 2:00am, at which time supper was served.

The article in The Gentleman’s Magazine goes on to describe the ladies’ fashions: “Ostrich feathers were universally worn; and diamonds in profusion.–Taste was stretched to the utmost limit to invent new dresses. The draperies were principally of white satin, ornamented with gold, silver, and diamonds.”

Wouldn’t it be wonderful to know which ladies of distinction wore these two dresses?

“TWO FULL DRESSES WORN AT THE QUEEN’S BALL AT WINDSOR.

“Fig. 1.–A short dress and train of fine muslin, embroidered all round with gold. The hair dressed with a diamond bandeau, and white ostrich feathers.

“Fig. 2.–A dress of blue muslin over white satin; the front embroidered with gold, and fastened over the bosom with a diamond broach. A diamond bandeau through the hair. White kid shoes.”