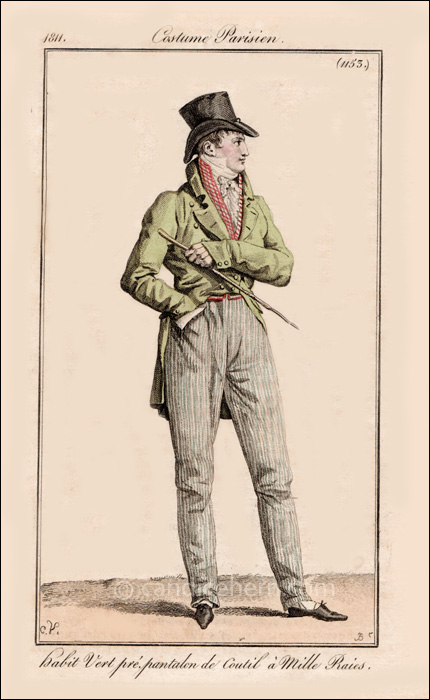 This dashing gent is dressed, from head to toe, in the height of French gentlemanly fashion.

The brim of his top hat is fashionably curved up high on the sides and dipping low in front and back. The brims of British top hats were never so dramatically curved.  Beneath the hat, his hair appears to be styled in the popular combed-forward Brutus style.

His green jacket is double-breasted with a unique style of notched lapel. The shoulders are slightly full, the tail cut straight, and the cuffs hanging low on the hand, which appears to be sporting a yellow kid glove. Beneath the jacket is a waistcoat in a bold pink and white plaid pattern, worn high on the neck and straight across the waist.

The trousers (called here pantaloons, though not as tight-fitting as true pantaloons) are made of green striped ticking, and kept neatly in place at the ankle by an elastic strap or stirrup under the instep, said to have been invented by Beau Brummell. The gentleman’s pose allows us to see that his trousers have side pockets. The green striped trousers paired with the pink plaid waistcoat is entirely a French affectation. British gentlemen were typically more conservative in their dress at this time, again thanks to Brummell’s influence.

The object in the gentleman’s hand is hard to identify. It looks somewhat like a riding crop, but he is definitely not dressed for riding, especially with those black slippers. It might be a collapsible walking stick, thought it appears a bit too flimsy. Its function remains a mystery to me.