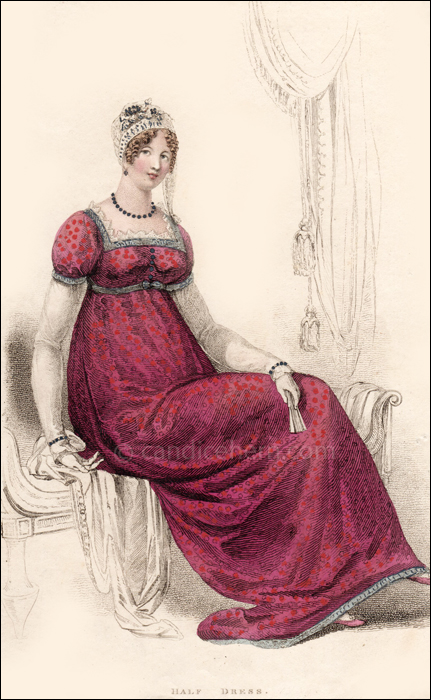 This print is from the second issue of the Repository of Arts, which had begun publication in January 1809. It was the quality of prints like this one that encouraged other publications, in particular La Belle Assemblée, to improve the quality of their prints. As with many of the fashion prints of the early years of this magazine, the designs were provided by the famous Madame Lanchester.

The long sleeves of this dress look as though they might be detachable, which was very common during the Regency, allowing a dress to be worn throughout the year. As this dress was for February, long sleeves would have been appropriate for the cooler weather. It is easy enough to imagine the dress without sleeves for spring or summer. It is somewhat unusual in this early period, however, to see detachable sleeves of a different fabric than the dress.

“An Egyptian head-dress of silver and pearls, one point falling on the left shoulder, finished with a tassel; the hair in loose ringlets; pearl ear-rings, bracelets, and necklace; a train dress of brocaded sarsnet, trimmed with silver and vandyked; lace round the neck in the form of a tucker; long sleeves of Mechlin or Brussels lace; white gloves and fan; shoes the same as the dress, of brocaded silk, with silver bows.”

And later, at the end of General Observations:

“Madame Lanchester (St. James’s-street) has furnished the designs of the fashions [i.e. as seen in the two prints for the month] with her usual taste.”