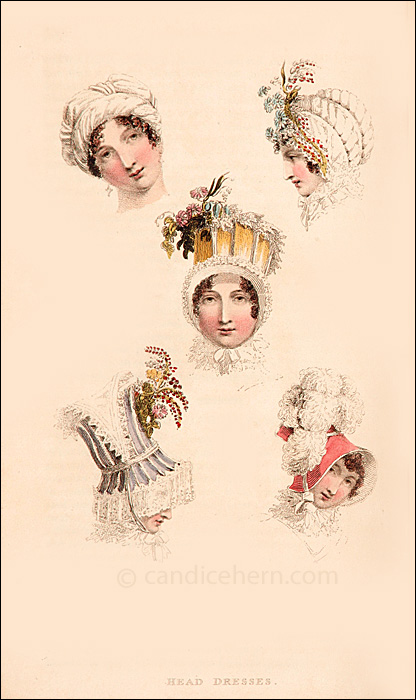 By 1812, the crowns of bonnets began to get larger, and by 1814, the year of this print, the crowns exploded to sometimes ridiculous heights, further exaggerated by crazy amounts of flowers, ruffles, bows, and plumes. The hats shown here are modest compared to others seen in this year, especially in French prints, though the one on the lower left provides a hint as to how tall the crowns had become.

By the following year, 1815, the brims began to catch up with the crowns, and by 1816 the crowns had shrunk and the brims had become enormous. (You can see examples of the enormous brims in this 1816 print.) These were the years when excess ornamentation and overall fussiness had become all the rage, so the giant bonnets are all of a piece with those styles.

Thankfully, turbans did not follow the make-it-bigger trend, and the one shown here in the upper left could have been worn at any time throughout the period.

“No. 1 [upper left]. A full turban, made either in tiffany or silver net; the crown lashed with silk or silver cords.
No. 2 [upper right]: A melon cap, made of white satin quilted, with narrow bead trimming inlet, ornamented with a full cluster and wreath of flowers, blended with a quilled border of lace.
No. 3 [bottom left]: A Perisan calash, formed upon a wired fabric, and composed of satin-striped ribband, trimmed with a full border of blond lace, appliqued with a heading of Vandyke: a net handkerchief crosses the crown en suite, with a large cluster of wild flowers in the center.
No. 4 [bottom right]: A cottage bonnet, made in salmon colour and white velvets, ornamented with a double plume of ostrich feathers.
No. 5 [center]: A Russian à-la-mode, composed or orange and white velvets, trimmed round the edge with a qulling of Vandyke lace: the crown decoration with flowers and wreaths of Vandyke lace.”