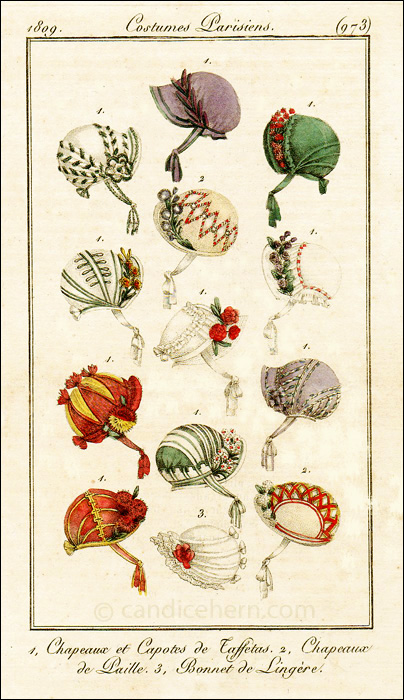 This magazine, which was published every 5 days, generally included a print of hats in every 4th or 5th issue. In fact, in her book Le Journal des Dames et des Modes ou le Conquête de l’Europe Feminine, Annemarie Kleinert states that at least 10% of all plates from this magazine where devoted to hats.

It is easy to trace the changes in bonnet styles in these French prints as there are so many of them. 1809 is a year of restraint in terms of hats. Two years before there had been enormous tunnel-like pokes and small crowns. By 1809 the crown have become rounder and more full, and the brims quite small.

“1. Chapeaux et Capotes de Taffetas.” Chapeau refers to any type of bonnet of stiffened fabric or straw. Capote refers to a hat where only the brim is stiffened, and the crown is composed of a softer fabric. These are made of taffeta.

“3. Bonnet de Lingère.” This is a linen cap. It would have been worn indoors with a morning dress, or perhaps outdoors in high summer.