Fashions of London and Paris, October 1799 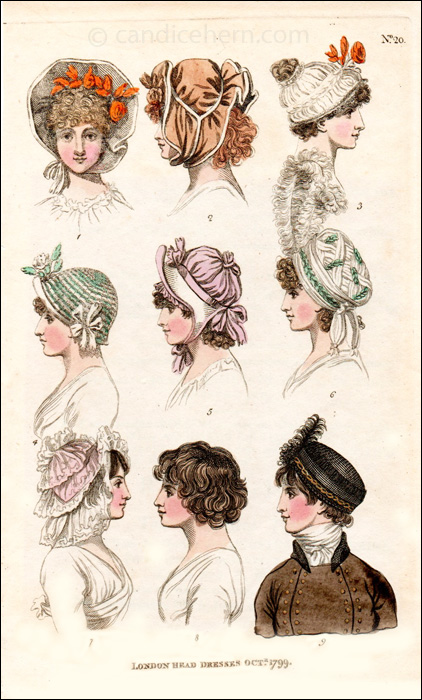 The only fashion accessory ever to have its own fashion print is the hat or bonnet. This publication was the first British magazine to publish prints of hats, though the Parisian magazine le Journal des Dames et des Modes had also begun to include similar prints. Prints from both magazines also sometimes included hairdos among the hats, as here. Many bonnets had special names, some based on the designer, some based on a place, and some just fanciful, as with the hermit hat here.

“Fig. 1 and 2 represent the front and side of the hermit hat, which is fancifully made of willow, bound with ribband, with a wreath of orange roses in front. This hat has lately been imported from Paris by Miss Barry, Milliner to the Duchess of York, New Bond Street, and is worn by several ladies of high rank.

“Fig. 4. Bonnet of frivolity and chip, turned up in front with bow and flower.

“Fig. 5. Bonnet of white chip and satin; turned up in front and tied under the chin. Crown full and finished at the top with a bow.

“Fig. 6. Turban of white crape, made much on one side; the top is flat, doubly crossed with pleated crape, and ornamented with pieces of wreath. On one side is a full reverse plaiting of crape ornamented with wreath in the directions from the front to the crown; on the other side is a straight plaited band with a wreath as represented in the drawing. Ostrich feathers in front to fall back.

“Fig. 7. An elegant fancy dress cap, made of lace in three rows or borders, attached to a tight shape of pink silk.

“Fig. 9. Beaver hat of black or purple with gold chain band and double feather; the shape as expressed. Habit of corbeau or blue with ball buttons in double circular rows. Black collar. We are favored with this fashionable habit by Shoubridge, Hatter and Habit-maker to her Majesty and all the Princesses, in Old Bond Street.”