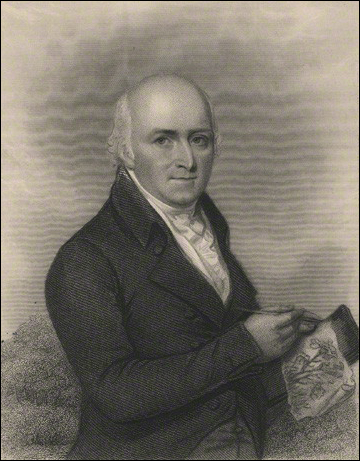 Humphry Repton was the last great landscape architect of the 18th century, though his style is what we think of today as pure Regency.

He had a varied, and not terribly successful career as a textile merchant, a journalist, an artist, a political agent, and a private secretary. In 1788, aged 36 and with four children and his fortunes dwindling, he hit on the idea of combining his sketching skills with his limited experience of laying out grounds at his small country estate in order to become a “landscape gardener” (a term he himself coined). Since the death of Capability Brown in 1783, no one figure had dominated English garden design; Repton was ambitious to fill this gap and sent circulars round his contacts in the upper classes advertising his services. His first paid commission was Catton Park in 1788.

That Repton, with no real experience of practical horticulture, became an overnight success, is a tribute to his talent, but also to the unique way he presented his work. To help clients visualize his designs, Repton produced “Red Books” (so called for their red morocco binding) with explanatory text and watercolors with a system of overlays to show “before” and “after” views. His Red Books are extremely collectable and quite valuable today.

Capability Brown had been a large-scale contractor, who not only designed, but also arranged and oversaw the realization of his work. By contrast, Repton acted as a consultant, charging for his Red Books and sometimes staking out the ground, but leaving his client to arrange the actual execution. Thus many of Repton’s 400 or so designs remained wholly or partially unexecuted.

Toward the end of the 18th century, Capability Brown’s style of garden design was heavily criticized. His sweeping green vistas and smooth, serpentine curves were seen as bland and unnatural, with a lack of formal setting for the house. Repton re-introduced formal terraces, balustrades, trellis work and flower gardens around the house in a way that became common practice in the 19th century. He stressed color effects in composing a landscape, paying great attention to the play of light and shade.

Repton had hoped to achieve the level of success of  Capability Brown, but much of his career was during the Napoleonic wars and he did not have the same opportunities as his famous predecessor. Brown had become wealthy. Repton’s income was never more than comfortable. But his impact on garden design was as profound as Brown’s had once been.