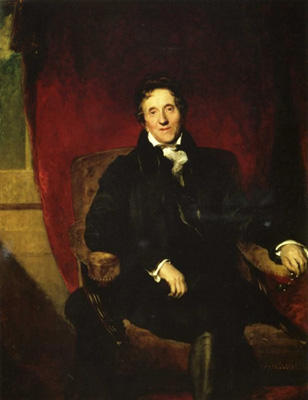 John Soane was an architect who specialized in the Neo-Classical style. He was a professor of architecture at the Royal Academy and was one of three “attached architects” for the Office of Works, which oversaw the building of royal estates and residences. His early career concentrated on private country estates, but it was his appointment in 1788 as architect and surveyor of the Bank of England which brought him fame. His work on the bank would continue for 45 years. Very little of his work remains, having been demolished in the early 20th century. (Architectural historian Nikolaus Pevsner described the rebuilding as  “the greatest architectural crime, in the City of London, of the twentieth century”.) Soane’s work on the Bank of England had a widespread effect on commercial architecture.

In 1811, Soane was appointed as architect for Dulwich Picture Gallery, the first purpose-built public art gallery in Britain, to house the Dulwich collection, which had been held by art dealers Sir Francis Bourgeois and his partner Noel Desenfans. Bourgeois’s will stipulated that the Gallery should be designed by his friend John Soane to house the collection. The gallery was completed in 1817 and continues in operation. It is one of the best remaining examples of Soane’s work.