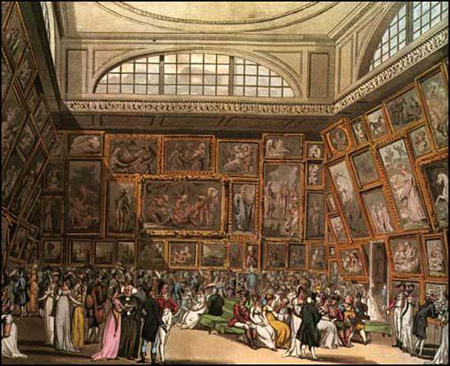 The Royal Academy of Arts was founded in 1768 by a group of 40 prominent artists (including two women: Angelica Kauffman and Mary Moser). Its first president was Sir Joshua Reynolds. The Academy functioned as a school aimed at teaching drawing, painting, and  sculpture to young artists at a time when there were no public art galleries and almost no art schools. Although the academy was officially under the patronage of King George III  (hence the “Royal” in the title), it received no official funding beyond the initial grant for small premises in Pall Mall, and was free to operate in its own way. In 1771 the Academy moved to Somerset House. In 1837 those premises were required by the government for administrative offices, so the Academy moved to Trafalgar Square, where it shared building space with the National Gallery. In 1868 it made a final move to permanent quarters at Burlington House.

Academy classes were provided free of charge, and scholarships were available to help needy students and to provide opportunities to pursue studies abroad. Lacking royal funding, the academy survived by charging attendance fees for public exhibitions.  Members were given the chance to make a name for themselves at the annual Summer Exhibition. This juried exhibition (shown in the print above from 1809), held each year from May to  August, was one of the highlights of the season, and invitations to the Royal Academy dinner before a private viewing were much sought after. Each year, there were more paintings on exhibit, the numbers becoming so great that the pictures were hung from floor to ceiling, with frames bumping up against each other. Artists competed for the best placement of their works, the most coveted positions being “on the line,” a molding that ran around the room just above eye level.