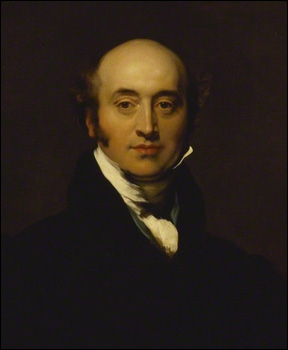 Lawrence might be considered the visual documentarian of the Regency, as he was one of the most important, and most prolific, portrait painters of the time. With a great deal of natural talent but no formal training (he began supporting his family with pastel portraits at the age of 10), Lawrence was accepted by Sir Joshua Reynolds as a student at the Royal Academy in 1787. He began exhibiting right away and his reputation spread. His first royal commission was for a portrait of Queen Charlotte in 1790. By 1794 he was a full Royal Academician and principal painter to King George III. By the time he was knighted in 1815, he was the most fashionable portrait painter in England, his subjects including most everyone notable in English society, as well as many of the crowned heads of Europe. From 1820 to his death in 1830, Lawrence was president of the Royal Academy. in spite of his success, he spent most of life deep in debt. He never married.