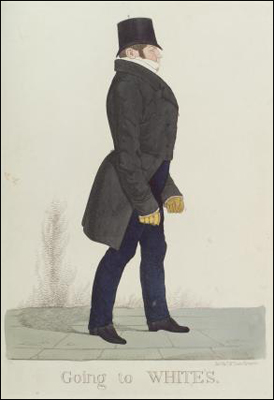 Regarded by some as the wittiest man of his day and a dandy to rival Brummell, William Arden, the 2nd Baron Alvanley was a popuar member of the Prince of Wales’ circle. He was a bruising rider to hounds, a fine sportsman, and a famous host of exclusive dinner parties. He was one of the hosts of the 1813 ball where Brummell, after being cut by the  Prince, addressed to Alvanley the infamous remark “Ah, Alvanley, who is your fat friend?” Like most of the dandy set, he loved to gamble, and lost most of his family’s property to gambling debts. Even so, he was perpetually good-humored and sharp-witted, and, according to Captain Gronow, “was awarded the reputation, good or bad, of all the witticisms in the clubs after the abdication of the throne of dandyism by Brummell who, before that time, was always quoted as the sayer of good things.”