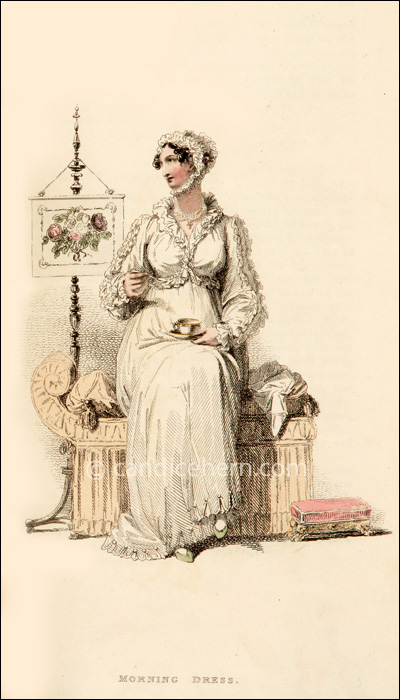 This print is so full of wonderful non-fashion detail: the Regency bench, the fire screen, the footstool, the cloth (perhaps a napkin) placed on the bench, and the teacup and spoon held by the model. It gives the entire image a sense of realism.

“A petticoat and bodice of fine jaconet muslin, finished round the bottom in vandykes and small buttons. The Rochelle spencer composed of the same material, appliqued with footing lace down the sleeve, and trimmed at each edge with a narrow but full border of muslin. Double fan frill of muslin round the neck, very full, continuing round the bottom of the waist, where it is gathered on a beading of needle-work. Bourdeaux mob cap, composed of lace, with treble full borders, narrowed under the chin. A small flower placed backward, on the left side. Hair much divided in front, and in full waved curls on each side. Necklace of twisted gold and pearl, with pendant cross in the center. Spring Greek [green?] kid slippers; and gloves of the same.

“[This dress is] from Mrs. Gill, of Cork-street, to whose taste and invention this work as well as the world of fashion, are under continued obligations.”