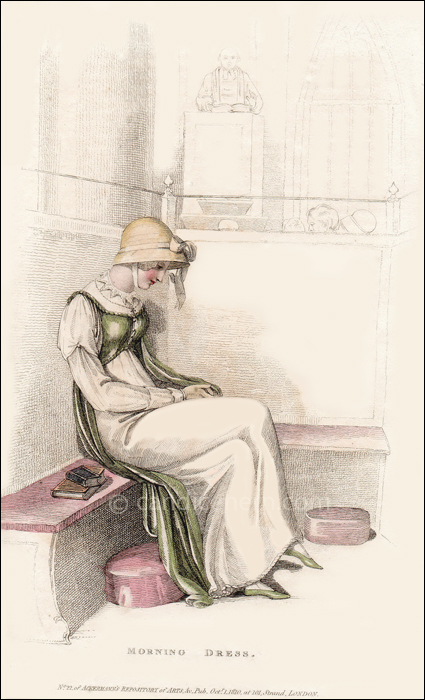 One of the occasions on which a lady would wear an outdoor morning dress was to attend church services. This is the only print I have so far encountered in which the model is shown inside a church. She is seated in a box pew with the pulpit set high above. Box pews provided privacy and allowed a family to sit together. With the mid- 19th century church reforms, box pews were generally swept away and replaced by bench pews. However a number of examples still remain in various churches throughout England.

The green robe and bonnet could be removed to make this a typical indoor morning dress.

“A plain cambric high gown, with surplice sleeves, and vandyke border round the throat. A Spanish robe of pea-green muslin, crape, or sarsnet, bordered with cambric trimming, and buttoned to the shape in front. A winged mob cap, composed of white crape and beading. A bee-hive bonnet of fine moss or plaited straw, ornamented with white sarsnet ribbon. Limeric gloves, and Spanish slippers of sea-green kid.”