Ackermann’s Repository of Arts, May 1817. 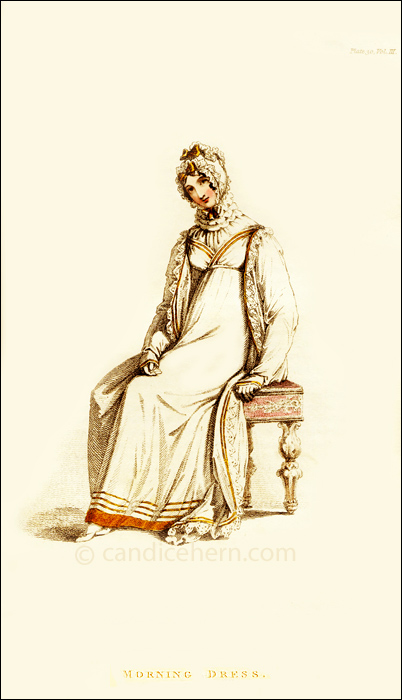 This dress is actually quite simple for 1817, when one would expect more flounces at the hem. But as this is an indoor morning dress, ie it was worn at home with the family and not for visitors, then simplicity still had its place.

“A round dress composed of cambric muslin; the skirt trimmed with lemon-coloured satin, a broad fold of which is placed byas round the edge of the skirt, over which are three narrow bands, also byas. The body is made full, and is ornamented at the throat, in a very novel style, with puffings of muslin. The shape of the bosom is formed in a very becoming manner by a low front, which is trimmed to correspond with the skirt. A loose robe, which is open in front, and descends from each shoulder, where is is fastened, to the feet, is worn over this dress: it is trimmed round with rich pointed work, and a double row of satin to correspond with the skirt. Long plain sleeve, finished at the wrist by a single fold of satin. Morning cornette of a peculiarly becoming and simple form; it is tied under the chin, and ornamented with bows of lemon-colored ribbon. White kid shoes and gloves.”

In the General Observation on Fashion and Dress, we find the following:

“Morning costume continues nearly the same as last month. Muslin is universally worn. Tucks are as much as ever in request: some ladies carry this fancy so far as to have their dresses trimmed with three flounces of clear muslin, each of which is finished at the edge by three narrow tucks.”

So, clearly, the fussier flounces and trimming were indeed still in demand.