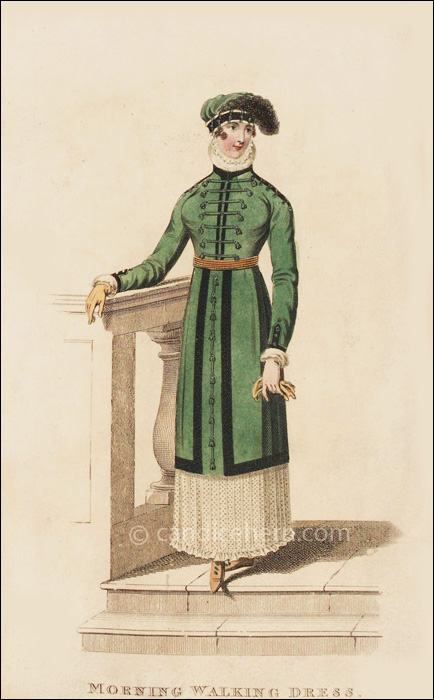 Military styles, especially in pelisses and spencers, prevailed throughout the period of the Napoleonic Wars. The low waist shown here is not unusual for an outer garment of this Mid-Regency period. The dress underneath is likely made in the standard high waist of the period.

“A three quarters pelisse of dark willow-green sarsnet, or fine Merino cloth, worn over a round dress of fine India muslin, richly embroidered, and trimmed round the bottom with lace, put on rather full. The pelisse made round in the skirt, like the short Indian coat; and trimmed round the throat and wrists with swansdown; faced in front and trimmed round the bottom with broad striped of black velvet; military front, with two rows of mother-of-pearl buttons, fastened down the front of the skirt with one row of the same and alternate tassels, the colour of the pelisse, which is confined at the waist with a gold belt. Yeoman’s hat of the same colour, materials, and ornaments as the pelisse, and finished in front with a flat ostrich feather. Half-boots of light fawn coloured kid, laced with dark willow green in front. Limerick gloves of pale straw colour.”

From the General Observations on Fashion and Dress in this same issue: