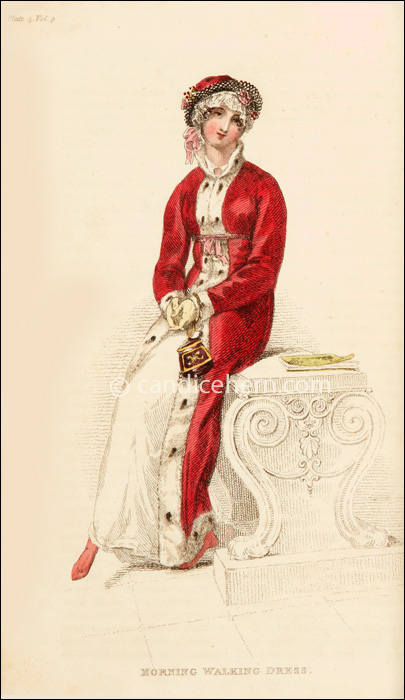 I once used this print as a Christmas card, as it seems so evocative of the season!

In most cases, a daytime bonnet or hat was worn with a cap underneath. Besides creating a lovely, often lacey, frame around the face, I suspect the cap served another purpose: when removing the bonnet — for a visit, for example — one would not have to deal with flattened “hat hair” but instead had the pretty lace cap on display. The hat here is quite unusual and very pretty. The black chenille edge, with its open netting effect, appears to be stiffened to act as a brim, as it is turned up around the face.

Note that the purse is called a ridicule in the description. This is the term used in all the ladies magazines of the period, as far as I have seen. The term reticule did not come into common use until the early 1830s.

“A round robe of Cambric muslin, with long full sleeves, and simple short collar, confined  in the center of the throat with a stud or broach; the same fastening the dress at the wrist. A robe pelisse of bright morone velvet, formed quite plain, simply meeting in the front, with rounded collar; trimmed entirely round with spotted ermine, and confined at the bottom of the waist with a ribband of corresponding shades, tied in front. A Flora cap, ornamented with ribband and small flower on the left side. A village hat of morone velvet, with open edge of black chenille; a flower similar to that which ornaments the cap, placed on the opposite side, and tied under the chin with the same ribband. Half-boots of morone velvet, or kid. Gloves of pale tan, or amber kid. Ridicule of morone velvet, embroidered with gold.”

After the description of the second print, the following note is added:

“These dresses are from the house of Mrs. Gill, Cork-street, Burlington-Gardens, who has for some time past furnished us with those specimens of English costume which we have given to our readers, and for the superior elegance of which she has long stood distinguished and unrivalled.”