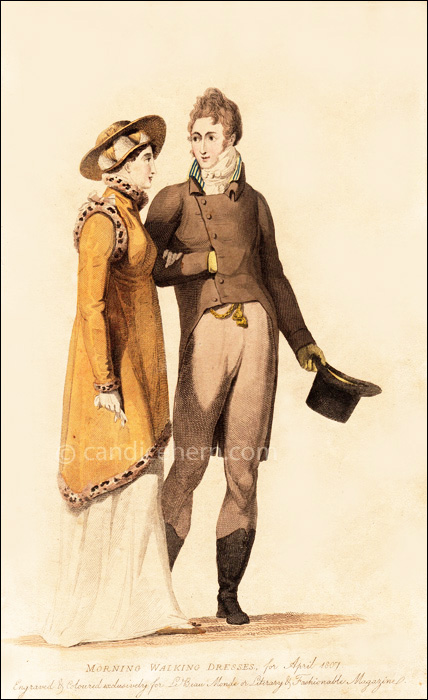 The print title would appear the describe the costumes for both the lady and the gentleman, as his top hat, short boots, and pantaloons are appropriate for daywear. The magazine text, however, describes his costume as “Half-Full Dress,” which ordinarily defines evening wear. In this case, I believe we should trust the print title as the more accurate description, as boots were never worn in the evening, except with military uniform.

The outer garment worn by the lady is here called a mantle, which is a term more typically used for a sleeveless cloak-type garment. This looks more like a pelisse. But is is named a Castilian Mantle, so perhaps it is a Spanish-specific type of garment.

It is unfortunate that the description does not mention the lady’s hat, which is very unusual and quite striking

“Fig. No. 3.–MORNING WALKING DRESS. A Manteline à la Castilliane: a short mantle of orange and purple velvet, made to fasten on the right shoulder, and crossing the bosom, is confined with rich cords and tassels under the left arm; rounded gradually so the bottom of the right side is a regular point; a body of the same, with sleeves and high full collar; the back and skirt are cut in one, with only one arm hole; the whole trimmed entirely round with spotted leopard fur. A train petticoat of clear India muslin, made full and quite plain, without any ornament or work whatever, is worn with this dress; white kid gloves, and shoes of the same colour as the mantle.

“Fig. No 4.–HALF-FULL DRESS FOR GENTLEMEN is composed of a light olive double-breasted coat, button close up, with covered buttons of the same cloth as the coat; yellow striped toilinette waistcoat; light brown Angola pantaloons, and half boots; the hair cropped à la Titus.”