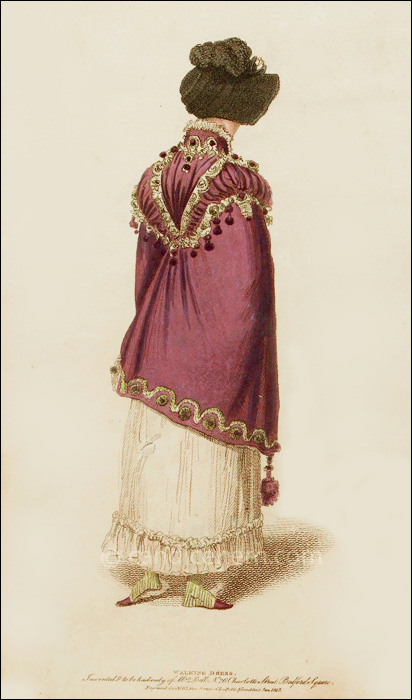 Though we cannot see much of the dress beneath the mantle, it is nevertheless described in some detail, perhaps to give the patron of Mrs. Bell, the designer, an idea of what type of dress would look best with the mantle. Or what type of dress she must buy from Mrs. Bell to go with this “most striking, tasteful, elegant, and original” mantle. The description of this mantle, below, is one that so effusive in its praise that one must wonder if Mrs. Bell herself did not write it.

“French cambric walking dress, very short in the waist, and the body à-la chemise, superbly appliqued with letting in lace. Long sleeve ornamented in a similar manner all the way down. The mantle which is worn with this dress is composed of the finest Morone, or plumb-coloured cloth lined with white sarsnet; the form of this mantle is the most striking, tasteful, elegant, and original that we have ever seen. For the shape we refer our readers to the Plate. The fullness at top is composed of satin, to correspond with the cloak, laid on in folds. The trimming, which is a mixture of floss, silk, and chenille, is the most elegant novelty of the kind that has ever been  introduced. We have no hesitation in saying that it is infinitely superior in effect to any of the silk trimming now worn, and it is, perhaps, the only one of them, the pattern of which is perfectly novel and original. The mantle will be found particularly desirable for delicate women in the present severe weather, from its being wadding round the shoulders and bosom, a circumstance, however, which by no means prevents its displaying the shape to the utmost advantage in that respect; indeed it claims a decided preference, since nothing can be more elegantly becoming. Improved French bonnet of black Britannia pearl fur, ornamented with a light elegant plume of feathers to correspond. Peach-blossom gloves and half-boots.”

The following statement refers to both fashion prints for the month, the other shown here:

“The above dresses were invented by Mrs. Bell, Inventress of the Ladies Chapeau Bras and the Circassian Corsets, and of whom only they can be had, at her Magazin des Modes, No. 26, Charlotte street, Bedeford-square.”