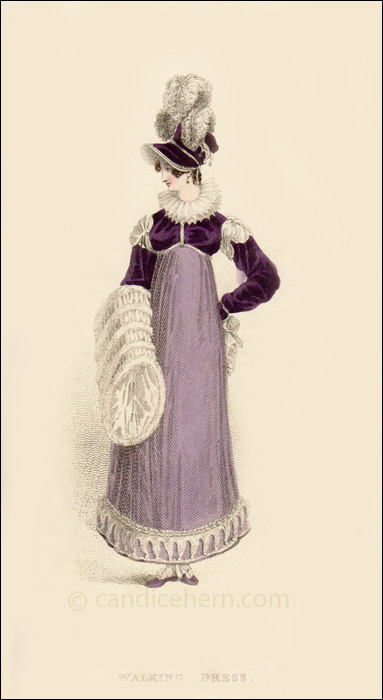 During this later period, we begin to see lots more ornamentation in fashion, but this ensemble is unusually restrained. The flounce is modest, and only the ruff and half-sleeve on the spencer offer anything ornamental. The bonnet crown, and its feathers, are quite tall, as was typical at this time, and the muff is huge. This is one of the few instances in which a muff is shown that is not made of some sort of fur.

“PROMENADE DRESS. A morning dress composed of the finest dark mulberry ladies’ cloth, finished at the bottom of the skirt with a new-invented trimming, which has an uncommonly light and pretty effect. A plain high body, over which is worn a spencer made of velvet one shade darker than the dress, and ornamented with white satin; the half-sleeve, which is composed of white satin, and finished with white silk ornaments, is particularly novel and tasteful. Head-dress, improved French bonnet, lined, edged, and trimmed with white satin, and ornamented with white feathers. Pointed lace ruffs. Mulberry kid sandals and gloves. The Roxburgh muff worn with this dress is composed of white satin and swansdown, and lined with white satin. This miff, which we may venture to recommend to our fair readers as a very elegant novelty, is just introduced by Mrs. Griffin, and is, from the beauty and delicacy of the materials, calculated only for the first sty;e of promenade or carriage dress.

“We are indebted to the taste and invention of Mrs. Griffin, of Rider-street, St. James’s, for both our prints this month.”