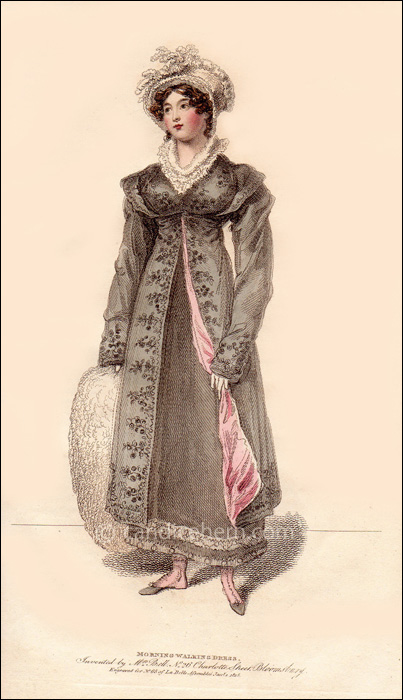 The bodice and shoulders of the pelisse are beginning to look like the broad styles of the mid-1820s (not my favorite period). But I do love the pink lining. And the pink half-boots!

Though the dress and pelisse are black, there is no mention of mourning in the magazine, and I am not aware of any court mourning at this time. We must assume black was simply a fashionable choice. The bright pink lining of the pelisse would certainly not have been worn for mourning.

The description, below, is so effusive that I have always assumed it was written by Mrs. Bell, the “inventress” of the entire ensemble. She was in some way related to the publisher (most scholars believe she was likely his daughter-in-law), so I think she might have been the magazine’s fashion editor for a time. That would allow her to promote her own creations with such enthusiasm.

“Black velvet slip, finished at the bottom with a double row of perfectly novel trimming. Over this dress is a black satin pelisse, lined with rose-coloured sarsnet, made in a style the most novel, tasteful, and becoming that we ever remember to have seen. The form of this dress is perfectly original, and has never before been introduced. The trimming, which is at once superb and tasteful, is composed of stamped velvet; it is infinitely superior to embroidery, for which it is intended as a substitute. If we may venture to judge of the estimation in which it is held, by the demand there is for it, we may safely pronounce it is likely to rival all other trimmings for pelisses. Its novelty must render it desirable to ladies of taste in a dress, who, if they consult the annals of fashion will find that nothing similar has ever been introduced before, and its effect is at once rich, striking and tasteful; but in fact, we cannot do it justice in description, and this we are sure will be acknowledged by every lady who has seen the original pelisse. A piece of rich worked muslin, or pointed lace, stands up round the bosom, and partly shades an elegant small tippet of the newly invented Britannia pearl fur. These tippets, which are now much worn, are particularly appropriate to dark silk, or velvet pelisses, as they considerable heighten their effect. Head-dress, the Britannia pearl fur hat; it may be termed the most tasteful and appropriate head-dress of the season; it is lined with white satin, and ornamented in a most tasteful style, with a beautiful plume of white feathers. The Britannia hat is exquisitely adapted to the first style of promenade dress, and is unquestionably an elegant improvement on the French bonnets, and possessing infinitely more taste. The materials of this hat are extremely appropriate for head-dresses; it is so much richer, and considerably lighter than either velvet or seal skin, and more adapted to the season than satin or any sort of silk. Large sized muff, composed also of Britannia pearl fur.

“The above dresses [the one shown here and this one] were invented by Mrs. Bell, Inventress of the Ladies Chapeau Bras and the Circassian Corsets, and of whom only they can be had, at her Magazin des Modes, No. 26, Charlotte street, Bedford-square.”