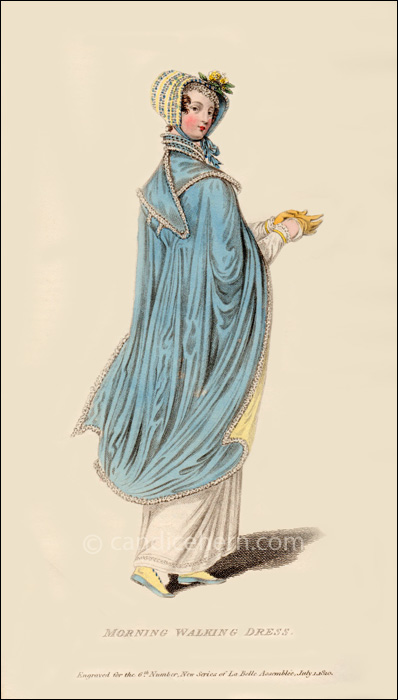 This print shows an interesting arrangement of a long mantle and a short cape. Also interesting is the collar of the mantle can be pulled up like a hoodie. Note the adorable boots, which remind me a bit of this pair in the Victoria and Albert Museum.

“A round dress of thick fine India muslin, made high in the neck, with long sleeves, which are trimmed at the wrists with a narrow edging of lace; a lace let in round the bottom of the dress between four rows of small tucks. A light sky-blue mantle, lined with pale buff, with elastic collar, with is formed with letting-in lace, and has the appearance of a full collar, but will, if required, by drawing over the head, form a very pretty and becoming bonnet; a cape of the same materials crosses the back, which is confined at the bottom of the waist, on the inside, with a pale-blue or buff ribband, tied with a bow in the front; it is entirely trimmed round with a narrow edging of lace. A bonnet of straw, and pale-blue ribband, with plaiting of lace, worn underneath, tied under the chin; with a yellow rose in front, and hair in ringlet curls, completes the dress. Gloves of pale buff. Boots of the same colour, calashed and laced with pale-blue.