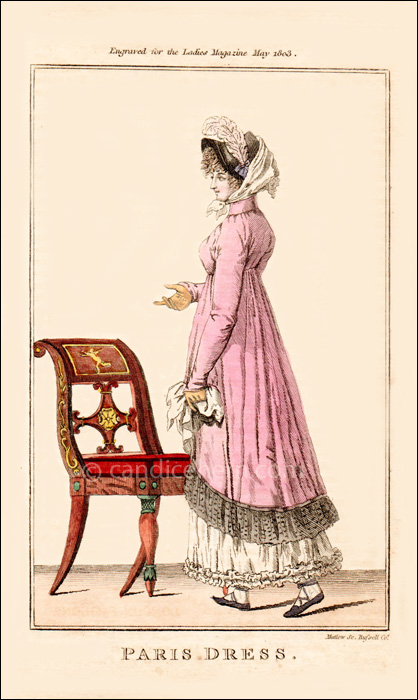 The original French print is labeled “Toilette du Matin.” ie a Morning Dress. The short length and the bonnet mark it as a morning walking dress.

From 1801 through 1804, The Lady’s Magazine used prints from the French publication Journal de Dames et des Modes, modified them slightly, and titled them “Paris Dress.” At least they gave some credit to Paris, without actually naming the French magazine, whereas most of the other British publications that copied the French “Costume Parisien” prints never mentioned that they had “borrowed” them.

This print is an interesting example as it is modified to a greater degree than most “Costume Parisien” prints. You can see the original French print at the bottom of this page. First, the figure is reversed, which generally means that the original print was pin-pricked to copy the design onto paper. The final design followed the pin pricks, but when transferred to a copper plate for printing, it was naturally reversed. The other major modification here is the addition of the rather spectacular Regency chair. It is unusual to see a significant addition like this when a “Costume Parisien” print is used by another publication. 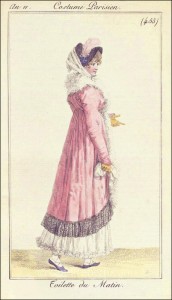 Slight modifications to the fashion are not unusual. Here, the swansdown trim on the pelisse seen in the French print has been removed. The rest of the ensemble — pink pelisse with black lace trim, white dress underneath with gathering at the hem, black sandals, black bonnet with white feather, tan gloves — remains as seen in the original print. (Click on the French print to see a larger version.)

The Lady’s Magazine did not provide detailed descriptions of their fashion prints, like other magazines did. There were sections entitled “Parisian Fashions” and “London Fashions” that sometimes briefly mention what is shown in the print. This month’s section on “Parisian Fashions” includes the following statements, which seem to relate to the print :

“… The Jewish coats (or Josephs), of silk, are again in use; they are edged with black lace.”

“… Almost all straw hats are bound with a violet silk handkerchief.”

“…Violet and rose are the prevailing colours.”