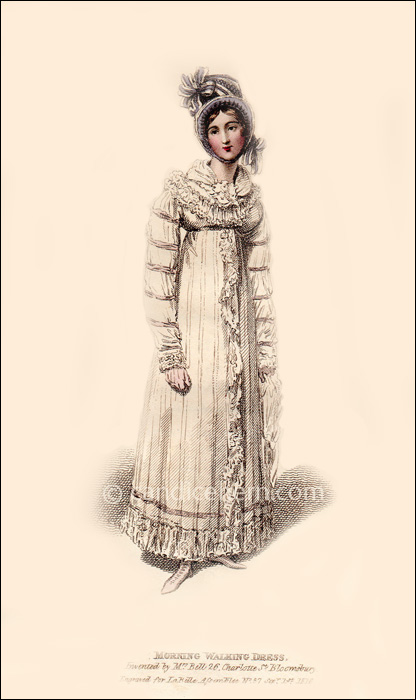 Rudolph Ackermann is said to have used specialists to hand-color the faces of the fashion prints in his Repository. The face here is so elegantly and subtly painted that we can probably assume that the editors of La Belle Assemblée also used face specialists.

The overdress is made of leno, which was a transparent gauze-like fabric of linen thread, very soft and feminine.

In the General observations on Fashion and Dress in the previous issue of the magazine, the British Lady’s Bonnet is first introduced:

“Lastly, we mention a bonnet which, for its peculiar elegance and utility, must occupy a place by itself; it is aptly styled the BRITISH LADIES BONNET, and is well deserving their attention. Formed of a material most light and unique, its durability and flexibility are such that it is almost impossible to put it out of shape; and while its novel texture renders it highly becoming to the British fair, it calls forcibly for their patronage in the employment, which, if encouraged, it is sure of affording to hundreds of indigent females. This tasteful and laudable invention is to be had only, at present, at Mrs. Bell’s Magazin de Modes, in Charlotte-street, Bedford-square.”