The fashion prints from this expensive publication were much larger than other magazines, quarto size, approximately 12″ x 9″. We don’t know the artists, but the engravings are always fine, and the hand-coloring beautifully done. The Gallery of Fashion was aimed at a very high level of society.  Among the known subscribers were Queen Charlotte, Princess Augusta, Princess Elizabeth, and the Empress of Germany. 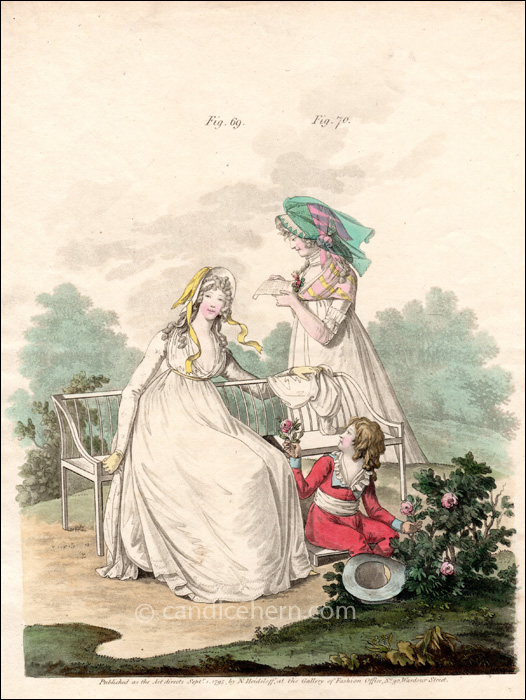 This is such a charming print, depicting a scene that appears entirely genuine. A young mother seated on a bench in a park-like setting with her son at her feet, who is offering her a rose apparently just plucked from the bush before him. A second lady, perhaps the seated lady’s friend or sister, is engrossed in a letter that seems to please her.

One point of interest is the extremely low neckline on the seated lady, showing considerable cleavage, rare in daytime dresses, at least in British prints (not so rare in French prints).  Perhaps it was an especially warm day, and she temporarily removed the fichu or handkerchief she has draped of the bench back.

“Fig. LXX. The hair in small curls and ringlets, white satin riband drawn through it. Star hat variegately coloured, with a Vandyke border; rose-coloured handkerchief over it, tied on the left side into a bow; green veil. Muslin stock round the neck, frilled with lace. Round gown of India long cloth, with six buttons placed in a triangular form, on the back of the waist. Short sleeves with a ruffle, headed with a quilling of lace. Large striped handkerchief. Gold ear-rings. Rose-coloured gloves and shoes.”