Clearly, these are outdoor morning dresses, or walking dresses.  During these final years of the 18th century, the waistlines had risen, but the skirts were much fuller than they would become in the next decade. The skirt was tightly gathered at the back, generally with a small rolled bustle placed high on the back. It was during this early period that white muslin dresses became the standard female costume. 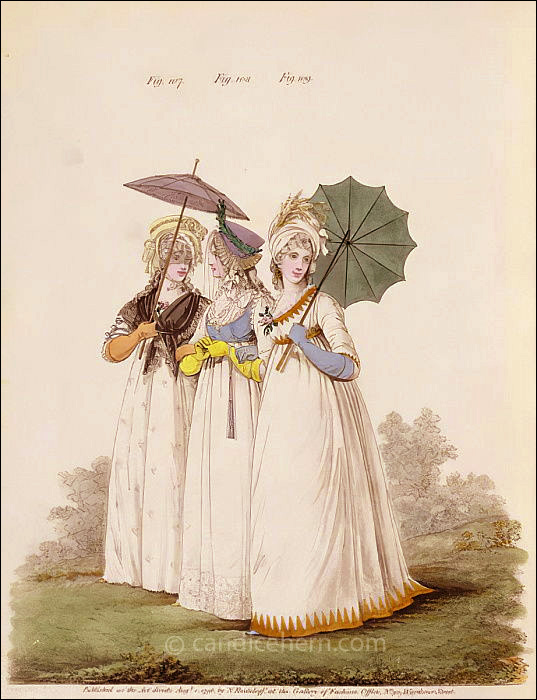 Note the colorful gloves. Most British prints show walking dresses worn with white, tan, or pale yellow gloves. It is rare to see gloves in colors outside that neutral palette. French prints often show more colorful gloves, and since the magazine’s publisher, Niklaus Heideloff, had lived in Paris and fled during the Revolution, perhaps he had a Parisian’s eye for colored gloves. It is also believed that at least one of his colorists, known as Madame Le Beau, had also fled the Revolution, so her French sensibilities may have been at work here as well.

“Fig. CVII. The hair in light curls, the side and hind hair in ringlets; one plain, and one puffed white satin riband, intermixed with the hair. Dunstable open worked hat with straw bows, ribands, and tassels, tied under the chin with a narrow white riband. Round gown of flower worked muslin, scolloped at the bottom. Short full sleeves, tied in three parts with lilac-coloured riband. Small black shawl, trimmed with broad lace. Fawn-coloured gloves and shoes.

“Fig. CVIII. The hair in small curls and ringlets. Emigrant hat, the crown of lilac silk, trimmed with a wreath of grass-riband, the points terminating in the shape of a feather, the brim striped with lilac riband and straw, tied under the chin with a white riband; white veil. Petticoat of lawn, with a broad embroidered border. Body of blue silk, bond with a small white silk chain; frock sleeves, and train of lawn. Chemise tucker. Yellow gloves and shoes.

“Fig. CIX. The hair in easy curls, the hind hair turned up plain. Turban of white muslin; bunch of corn [ie wheat] on the right side; bow of white satin riband on the left. Round gown of fine calico; short push-up sleeves; the whole trimmed with a gold-coloured chintz border, in Vandyke scollops. Plaiting of lace round the neck. Gold hoop ear-rings. Light blue gloves and shoes.”