Fashions of London and Paris, December 1809. 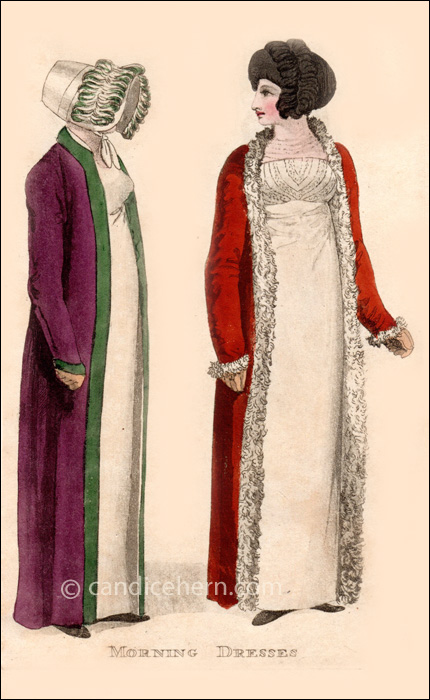 Each of these dresses is described as short. From the late 1790s through around 1807, hemlines were quite long, often dragging the ground. The new “walking length” dress, made somewhat shorter but not yet as short as we will see in a few years, started to see growing popularity in 1808.

“Fig. 1.–A short dress of white muslin, made quite plain, with long sleeves. A pelisse of purple sarsnet, trimmed with green velvet. A Greek bonnet of white satin, trimmed with a white ostrich feather, edged with green. Purple shoes.

“Fig. 2.–A short dress of white muslin, with long sleeves; the front formed to the bosom by work or lace; a frock back, with work or lace let in, to correspond with the front. A habit shirt of lace, or net [shown as quite transparent in the print]. A pelisse of Spanish cloth, trimmed with Chingchelli [chincilla?] fur. A beaver hat ornamented with an ostrich feather.”