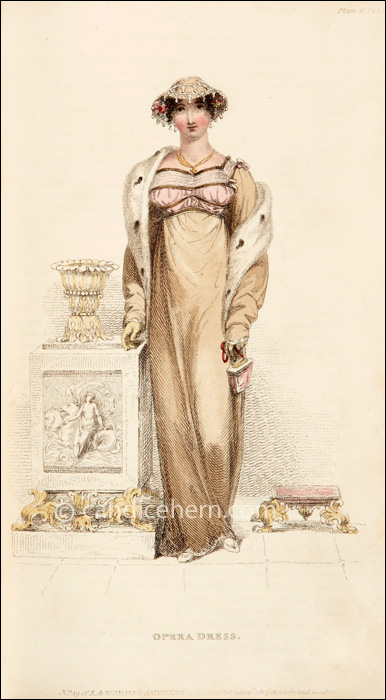 The Mary Queen of Scots cap is not, to my eye, the most flattering of headdresses, but it does indeed closely resemble a cap worn by that queen as shown in a famous portrait in London’s National Portrait Gallery.

At first I thought that might be a hard-sided reticule she is holding, but on closer inspection, I wonder if it might not be a case for an opera glass? If so, it would have been a monocular, likely with a collapsible scope, making it small enough to fit in such a case. Binocular opera glasses would not be invented for another decade.

“A round superfine cloth robe, or the new Russian flame-colour, or pale tan, with long full sleeve, ornamented at the feet with satin of the same colour, in deep vandyke. A fancy bodice, composed of pink satin, and trimming corresponding with the dress, finished with bows of ribband on the shoulders. A cap à la Mary Queen of Scotland, composed of the same material as the robe, lined with pink satin, and covered with net-beading, which forms a most unique and becoming finish for the edge. The hair divided in the center of the forehead, and in full curls on each temple, blended with a small sprig of the winter berry. Necklace and cross of pearl; bracelets and ear-rings of the same. White satin slippers, trimmed with silver. White kid gloves; and long tippet of spotted ermine.

“These dresses [including this one] are from the house of Mrs. Gill, Cork-street, Burlington-Gardens, who has for some time past furnished us with those specimens of English costume which we have given to our readers, and for the superior elegance of which she has long stood distinguished and unrivalled.”