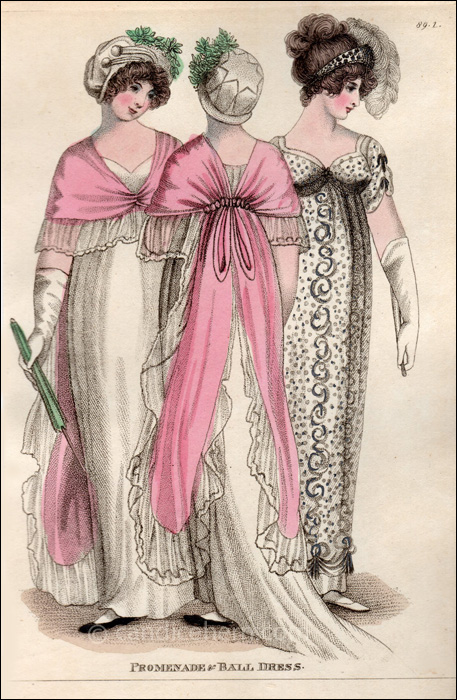 Fashions of London and Paris, June 1805.

The walking dress is shown from both and back, as an aid to dressmakers. The first volume of this magazine, in 1798, said this on the title page:

“Fashions of London and Paris containing figures faithfully drawn from real life in the most fashionable circles, intended for the use of Milliners and Mantua-makers etc., and for ladies of quality and private families who direct the formation of their own dresses.”

Descriptions are brief in this publication, so that the prints had to be made useful to the “mantua-maker.”

It is mentioned that the ball dress was worn at Frogmore. This estate, built in the 1680s, was purchased by George III in 1792 for the use of Queen Charlotte and their unmarried daughters. Though it was primarily a private retreat for the royal ladies, it was also the site of occasional balls and receptions.

“Fig. 1.–A dress of white muslin, made plain over the bosom, with short sleeves; a cloak of apple-blossom silk, trimmed with deep white lace. A white satin hat trimmed with crape and ornamented with a green sprig in front.

“Fig. 2.–A dress of plain muslin, with apple-blossom cloak, the same as the former, representing the manner it is worn behind. A hat of satin and crape, ornamented with a flower.

“Fig. 3.–Ball-dress, worn at Frogmore. A dress of white crape, richly embroidered, in stripes, with silver; the sleeves and bottom of the dress looped up with silver tassels; the whole covered with spangles. The hair dressed with a diamond bandeau and ostrich feathers. White gloves and shoes.”

I often show French prints that were copied by British magazines. But I have seldom seen British prints copied by European publications. However, I have just learned that this particular print was indeed copied by two German magazines. A curator from the Goethe Museum in Düsseldorf alerted me that my print was likely a model for two prints in their collection. 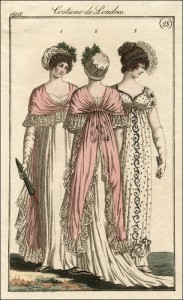 The first one shown is from the Frankfurt edition of the French magazine Journal des Dames et des Modes, July 1805. They have added a bit of landscape, more detail in the draping, and the faces are somewhat sweeter, but it is clearly a copy of the British print. And instead of the usual “Costume Parisien” at the top of the print, even in German versions, we now see “Costume de Londres,” ie London Fashion. 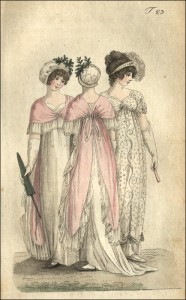 The second one is from Journal des Luxus und der Moden, Weimar, August 1805. This one is a bit less detailed than the Frankfurt print, but is still an obvious copy of the British print. (Click on both prints to see larger versions.)

Each of these prints was provided by the Goethe Museum. I appreciate them alerting me to these copies.