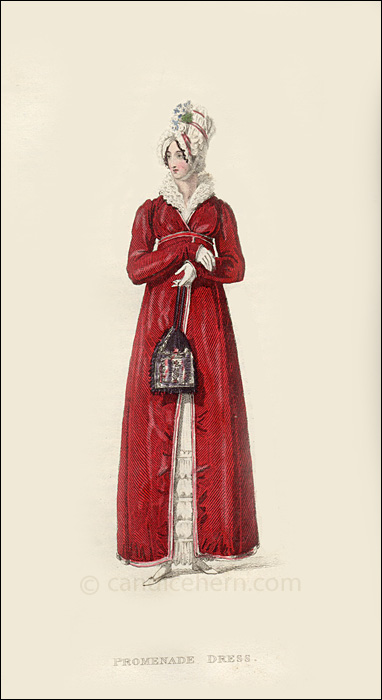 The red velvet Angoulême pelisse is named for the Duchesse d’Angoulême, who had left England after the 1814 restoration of the Bourbons in France (her parents were Louis XVI and Marie Antoinette). She had lived in exile in England since 1807 and had long been a favorite of the British people. Many items of fashion were named for her.

Note the purse is called a “ridicule,” a term borrowed from the French. The corruption of the word to “reticule” did not happen for another 15-20 years,

“A high dress of cambric muslin trimmed at the bottom with a single flounce of work. The body, which is composed entirely of work, fits the shape without any fulness. A plain long sleeve, finished by a triple fall of narrow lace. Over this is worn the Angoulême pelisse, composed of crimson velvet, lined with white sarsnet, and trimmed with a single welt of crimson satin, a shade lighter than the pelisse. The body is made exactly to the shape; the back is of a moderate breadth, and without fulness; for the form of the front we refer our readers to our print; it is confined at the waist, which is very short, by a narrow velvet band, edged to correspond. A small collar, of a novel and pretty shape, stands up and supports a rich lace ruff, which is worn open in front of the throat. The sleeve has very little fulness, an that little is confined at the wrist by three narrow bands of puckered satin. Bonnet à la Royale, composed of white satin, very tastefully intermixed with a large bunch of fancy flowers, and tied under the chin by a white satin ribbon, which is brought in a bow to the left side; a full quilling of tulle finished the front. Black silk ridicule, exquisitely worked in imitation of the ends of an Indian shawl, and trimmed with black silk fringe. White kid gloves, and black walking shoes.”

After the description of the second print in this issue of the magazine, the followed note is added:

“Our dresses this month are both French; but, as our readers will perceive from our prints, they are in the best style of Parisian costume. We have been favoured with them by a lady who has just returned from Paris.”